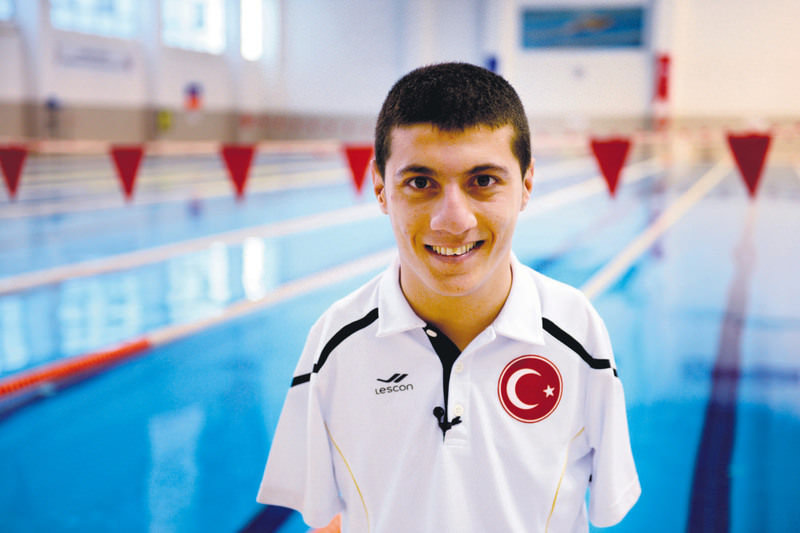 by Anadolu Agency Jul 10, 2015 12:00 am
Beytullah Eroğlu twists his waist as he warms up for another punishing training session. The athletic, 20-year-old swimmer gently lies down on a poolside practice sheet so his coach can warm his feet. Once this session is over, Beytullah slowly stands up and is directed to the pool. After a brief stop, he dives into the water like a torpedo. Because Beytullah Eroğlu has no arms, it is safe to say that his training regime is vastly different to most other swimmers.

Born in Kahramanmaraş, a southeastern province of Turkey, without arms and one leg shorter than the other, Beytullah led a secluded life as a child, a world open only to close relatives. Now the determined young man has competed at various international swimming games and won medals. The groundbreaking swimmer is eyeing his first medal at next week's IPC Swimming World Championships in Glasgow, Scotland. His desire goes beyond these games too. He wants to swim at the upcoming Paralympic games.

What has motivated him? His disabilities. It was one article in the local press that changed his life. Osman Çullu, a swimming coach, who read the story, came to the Eroglu family and asked if Beytullah would like to swim. "I was surprised at first. How could a person without arms swim?" Beytullah says. But Çullu was ready: he prepared special equipment for Beytullah so that he could learn how to float. Spending seven years with the bespoke rig, he eventually learned how to swim. "I watched video clips showing how disabled people could swim without any help. So I wanted to get rid of the special gear," Beytullah says. "Back then, I started swimming only for fun," he tells Anadolu Agency. But then the medals came. Now, after 14 years of swimming and winning so many competitions, competing has a different significance for Beytullah: to represent Turkey in an international arena. "I no longer feel that swimming is a luxury for me, rather, it is an opportunity to raise my country's status at an international level," Beytullah says. Regardless of his final ranking in Glasgow next week, Beytullah has already proved himself a winner.
Last Update: Jul 10, 2015 9:36 pm
RELATED TOPICS