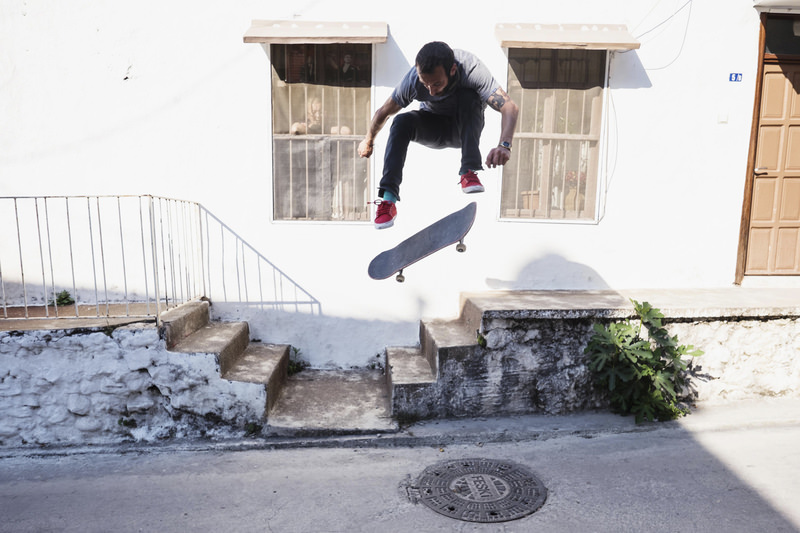 by Daily Sabah Jul 22, 2015 12:00 am
Turkey's first and only skateboard team Vans Turkey will hit the roads to tour Anatolia once again. The team of five skaters will organize their Turkey tour for the third time in order to encourage people to take up skateboarding, bring the sport's name to the masses and introduce Turkey's hidden treasures. Following their 2014 skateboarding tour along the Lycian Way, which shelters Turkey's most unique landscapes, alternative nature sports and history, the team decided to hold their next tour in southeast Anatolia, the cradle of culture and taste. During the tour, which kicks off on Aug. 4, the team will discover the towns on their way as well as the beauty of the cities and the proverbial local foods. The team will tour the southeastern provinces of Gaziantep, Kahramanmaraş, Kayseri, Adana, Mersin and Hatay and introduce the sport of skateboarding to young people who have never skated before. The tour, which will continue for 17 days and include six provinces, will come to an end on Aug. 22 in Istanbul. Composed of Cenk Kulioğlu, Can Uzer, Yiğit Akbıyık, Ali Osman Ensar and Alper Çanakçı who have all given their hearts to the sport and are considered to be the best skateboarders in Turkey, Vans Turkey will set off from Ankara on Aug. 3 and tour provinces that have left a mark on history with their culture such as Gaziantep, Kahramanmaraş, Kayseri, Adana, Mersin and Hatay. The team, which has raised awareness of skateboarding thanks to the tour they organized last year, aims to reinforce this awareness and want young people to experience the sport themselves. The team members want to spread the thrill of skateboarding to the villages along the way and say that they are excited to introduce skateboarding to youngsters while allowing them to experience the sport. Vans Turkey Skateboard 2015 Tour Route