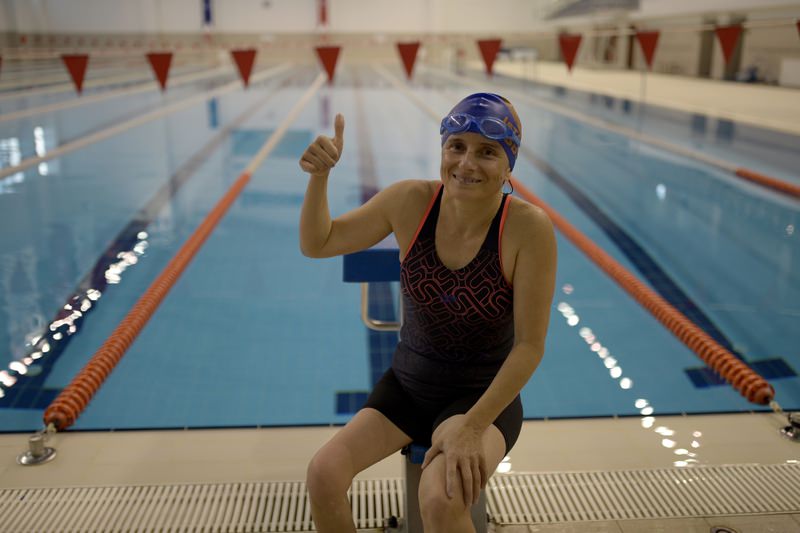 Çilem Çelik, a handicapped swimmer from the Istanbul Metropolitan Municipality Sports Club, has earned the title of the first handicapped Turkish woman to swim the English Channel with a Turkish team comprised of six sportswomen. Çelik said her next aim is to pass through other straits

Handicapped Çilem Çelik, 47, who is a licensed swimmer at the Istanbul Metropolitan Municipality Sports Club, swam the English Channel located between England and France in the company of a Turkish team comprised of six women. Çelik became the first handicapped Turkish woman to swim the English Channel.Çelik told AA how she started swimming. She lost the use of her legs after she contracted poliomyelitis when she was a child. She started to enter the pool when she was 7 and realized at that age that swimming was much easier than walking for her. After this, she started to swim in the sea and swam as an amateur until 2008. In 2008, she began to enter the pool on a regular basis.

When her potential was realized in the elimination tours held to choose which swimmer would participate in a contest to be held in the Bosporus Strait in 2012, she was accepted by the Istanbul Metropolitan Municipality Sports Club. She attended a swimming race held in the Dardanelles Strait in 2012 and came first in the branch of handicapped swimmers.

Çelik said that the swimming race held in the Dardanelles Strait was very meaningful for her. "It was very nice for me. The number written on my hair restraint was 58 and I finished the race within 58 minutes. I completed 6.5 kilometers within 58 minutes. It was a very nice try for me. When I became successful there, I believed that I could become successful in sea races and I mustered up more courage. I have placed high in the competitions I have competed in since 2013. I participated in the open sea swimming race in Datça in the winter. The sea temperature was 17 degrees. I came third in the general classification among women. I attend the races held in Datça every year. I came first this year in my age group. I swam between Kaş and Castellorizo, which was one of the most challenging raceways for me. It is like a pool as it is without any current. You swim from the Greek island Castellorizo to Kaş located on the Turkish coast. It was a 7-kilometer-long challenging raceway. I came first among my age group. I also participated in races held in the Marmaris. I have swum 5, 6 and 7 kilometers long raceways in general," said Çelik.

Çelik said that she attended the swimming races held in the Bosporus Strait in 2013, 2014 and this year and she placed high even though women and men swam in the same categories. Talking about her success in the English Channel, Çelik said that, "The team was comprised of six Turkish women. It was nice for me to hear that I was the only handicapped person in the team and no handicapped person from Turkey has swum across the channel before. The English Channel is the Everest Mount for swimmers. Each swimmer would like to swim there. It is a little challenging and a cold raceway. Fog can come down suddenly or rain can overtake you. You have to swim day and night. You have to be in the water for a whole day. The race took 16 hours. We were a team of six people and we entered the sea three times. You enter the water every other hour. When you get out of the water, hypothermia can occur so you try to warm up. Before you warm up enough, your turn comes. Even if just one member of the team says "I cannot do it" or gets hurt, the passing across the channel gets cancelled. The English Channel was perfect for me. We competed as a Turkish team. We competed to show the strength of Turkish women."

Çelik said that the distance of the English Channel was 35 kilometers as the crow flies but they swam in the shape of a large "S" because of the tidal flows and currents and this increased the distance to nearly 70 kilometers. Çelik said that they started to swim in the rough and cold sea on July 9 and completed swimming on July 10. She also added that swimming in the English Channel is not a race but a success criterion for swimmers and those who managed to pass the channel were given a license.

Çelik stressed that she started to swim in cold water one year ago to get prepared for the English Channel and started taking cold baths. She tried to increase her performance in the pool y swimming fast and exercised a lot to get used to the cold of the sea. "My next aim is to pass other straits in the world. I would like to swim across the Gibraltar Strait."

Duran Arslan, chief trainer at the Istanbul Metropolitan Municipality Sports Club said that Çelik has swum in many seas in the last two years and this has only increased her appetite. "She dreamed of being the first handicapped swimmer who swam the English Channel. Our club chairman Ahmet Hamdi Çamlı and Istanbul Metropolitan Municipality Mayor Kadir Topbaş supported her financially," said Arslan. As trainers, we are very happy that our swimmers swam across the English Channel successfully, said Arslan adding that "Our next target is the Gibraltar Strait. I hope Çilek Çelik will pass that strait successfully, too. We made a special preparations for the English Channel and will prepare another special program for the Gibraltar Strait, too. I hope she will become the first handicapped swimmer who passes the Gibraltar Strait."
RELATED TOPICS