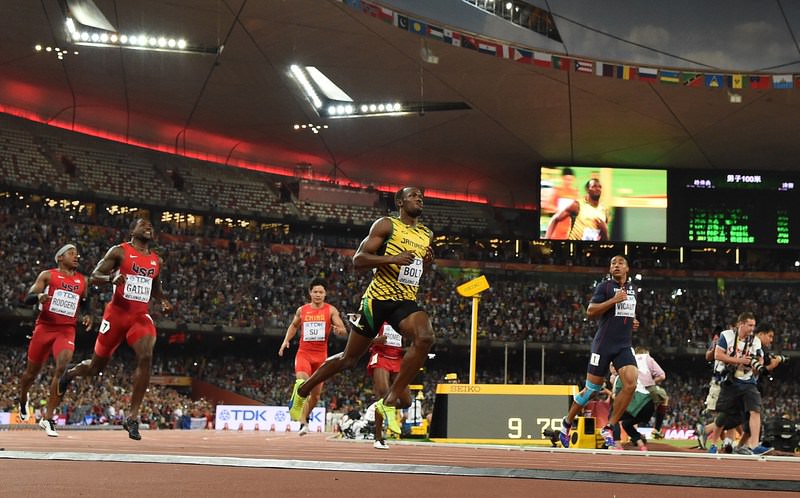 by Associated Press Aug 23, 2015 12:00 am
After two years of uncertainty, Usain Bolt produced his biggest clutch performance to beat rival Justin Gatlin on Sunday in the 100-meter final at the world championships with a lunge at the line.

Bolt was trailing for almost all of Sunday's race, the biggest showdown in the sport in years. But with gritted teeth, the two-time Olympic champion clawed back into contention and made his giant stride count to win in 9.79 seconds '€' .01 seconds faster than the American veteran.

Rising to the occasion as he always does, Bolt put a shockingly bad semifinal heat behind him to recover with a good start in the final. Two lanes to his right, Gatlin was as good as perfect for most of the race, but for seven years now, there is no denying the greatest sprinter in history.

"ıt is all about running the race and getting it done," Bolt said.

Going even just before of the finish line, Bolt glanced left to Gatlin in Lane 7 and threw his weight forward in a dip of desperation. His yellow-colored Jamaica jersey crossed marginally ahead the red-clad Gatlin for his third world title in the 100.

Bolt kept on powering along in celebration, and when he returned, Gatlin gave him a warm hug. At 33, Gatlin had been unbeaten for two years as Bolt struggled with injury. But on the biggest of occasions, timing was with Bolt again.

"Got nipped at the line by great Usain," Gatlin said.

ın a dead heat for third, Trayvon Bromell of the United States and Andre De Grasse of Canada shared bronze in 9.911 seconds.

Soon, the reggae was blaring through the public address system at the Bird's Nest and Bolt was performing his signature Lightning Bolt move.

ıt could have been so different had Bolt failed to recover from a stumble at the start in the semifinals.

The Jamaican great had as many as seven racers to catch before winning the heat. Anxious, he spent the last 10 meters looking to his left to make sure he would make the final.

The final was even tougher '€' even with one of Bolt's best starts in years. This time, it was Gatlin who tripped in the race.

Gatlin was aching for another gold medal, reaching his peak form at 33 after serving a four-year doping suspension midway through his career. He lost the tightest finish since the 2003 championships in Paris.

After becoming a mother last year, there also was plenty of doubt in the heptathlon about Olympic champion Jessica Ennis-Hill.

Three years after the 2012 London Games, Ennis-Hill remains the standout she once was. With three solid performances in the long jump, the javelin and the concluding 800, Ennis-Hill won her second world title, six years after her first.

Runner-up Brianne Theisen-Eaton needed to make up about six seconds in the 800 to win and went out fast to pressure Ennis-Hill with an early burst of speed. But Ennis-Hill kept her within striking distance and swept past the Canadian in the finishing straight.

Ennis-Hill won with 6,669 points, 115 points ahead of Theisen-Eaton. Laura ıkauniece-Admidina of Latvia took bronze with 6,516 points.

The host nation again fell short of a gold medal when Miguel Angel Lopez of Spain held off a strong challenge from Wang Zhen to win the 20-kilometer walk.

Even though Wang had been undefeated for a year, he entered the Bird's Nest when Lopez was already moving toward the finish line celebrating a gold medal to add to his European title from last year. Benjamin Thorne of Canada was third.
Last Update: Aug 23, 2015 6:07 pm
RELATED TOPICS