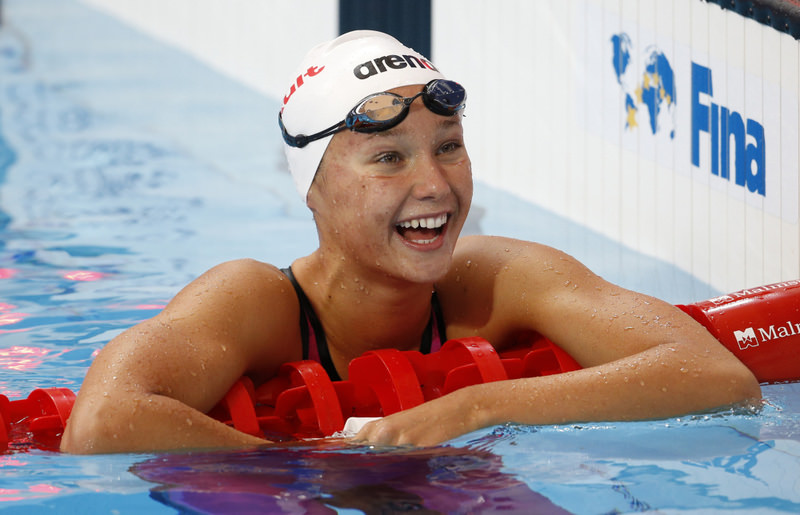 Ukrainian-origin Turkish swimmer Viktoria Zeynep Güneş won the women's 50-meter breaststroke title at the fifth World Junior Championships recently, a first in Turkey's history. Referring to the Ottoman Sultan Süleyman the Magnificent's Ukrainian wife Hürrem, she said "I want to be the new Hürrem of Turkey."

Turkey has been yearning for a gold medal in swimming for years, and now it finally has one thanks to Ukrainian-origin athlete Viktoria Zeynep Güneş. She won the women's 50-meter breaststroke title at the fifth World Junior Championships held in Singapore on Wednesday. Güneş, 17, won the final with a 30.78-second performance at the FINA (International Swimming Federation) World Junior Championships held at the OCBC Aquatic Centre. In the semi-final, she broke the Turkish record in the 17-18 and +19 categories with a 30.55-second performance. Sweden's Sophie Hansson was the runner-up at 31.18 seconds and Britain's Katie Matts came in third at 31.66 seconds. Güneş had claimed the 200-meter breaststroke title in the 2013 World Junior Swimming Championships for Ukraine before acquiring Turkish citizenship in 2014.

With her original name being Viktoria Solnceva, the swimmer has an interesting story. She was born in 1998 in Poltava, Ukraine. After the civil war erupted she fled with her family to Turkey in 2013, which turned out to be a dream year for Solnceva. While she was still a Ukrainian citizen, Victoria won gold in the 200-meter breaststroke, silver in the 50 meters and the bronze medal in the 100 meters in the World Junior Swimming Championship. She was also champion in the 50 and 200 meter races at the European championships.

After this magnificent performance, many countries such as Russia, Egypt, Sweden and Turkey eyed her for naturalization to race on their country's behalf. However, Russia's annexation of Crimea 2013 and the following clashes, speeded her departure from Ukraine. While she was in Crimea for training camp, Victoria escaped to Turkey with her family. She changed her name to Victoria Zeynep Güneş because her former surname Solnceva means Güneş (sun) in Turkish. She told of her escape story in an interview: "When the Russians came, we were in Yalta. Immediately we returned to Poltova where our home was in order to pack our belongings. Through Kiev, we went to Istanbul. We found out later that our pool was also attacked by Russians. So we said to ourselves that it was lucky we were here."

Victoria said why she preferred Turkey: "Russia is the enemy, Egypt is not suitable for us, Sweden is cold but Istanbul is very beautiful."

Zeynep stressed that she never had thought she would be a Turkish citizen since she had always seen Turkey as a holiday country. "Everything happened so fast. We decided to settle in Istanbul, a place we always wanted to visit.

"I'm aware that Turkey especially was hungry for victory in swimming. It makes me excited and on the other hand puts responsibility on my shoulders. I believe I made history in Turkey's swimming."

And there is also a celebrity part of her story. One Turkey's most popular TV series "The Magnificent Century," which told the story of the Ottoman Sultan Suleiman I and his beloved Ukrainian Hürrem Sultan. She said that she watched the show with great interest while she lived in Ukraine. She said, "I know that the most famous Ukrainian in Turkey is Roxelana (Hürrem Sultan's original name before she converted to Islam). But I will be the most famous Ukrainian in Turkey. That is, the new Hürrem Sultan."

Güneş's process for Turkish citizenship was carried out secretly, so much so that even Ukrainian officials were not aware of it. Until she was given a passport and her name was notified to the International Swimming Federation, the transfer stayed a secret.

Güneş is still not competing for a club but she is willing to swim for the Turkish club Fenerbahçe. "I love the neighborhood [Fenerbahçe] where I live, so I want to swim for Fenerbahçe sports club."
Last Update: Aug 28, 2015 12:18 pm
RELATED TOPICS