Race from from Asia to Europe begins with Istanbul marathon 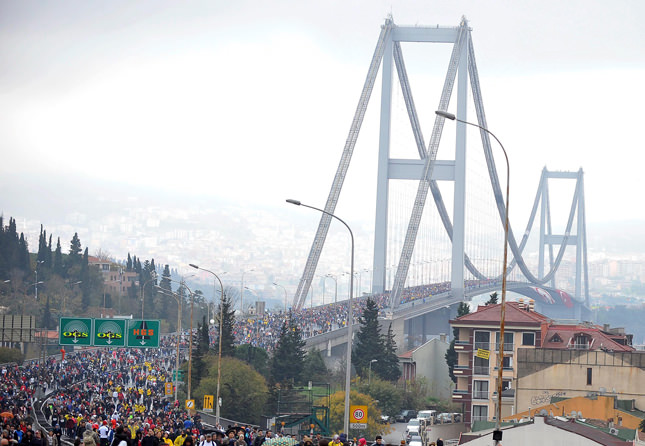 Thousands of people will meet in Turkey’s biggest city on Sunday to run the Istanbul Marathon, the world’s only road race where people can cross from Asia to Europe

The 37th Vodafone Istanbul Marathon's campaign for this year is "End Violence Against Women." The marathon will not only host some of the world's most elite athletes but also thousands of people who just want to challenge themselves by running 42 kilometers (26 miles).

Anadolu Agency met with some of these adventurous runners. One of them is Yum Kin Kok, 45, a Malaysian civil engineer. The Istanbul event is exceptional, Yum says, because it is an "intercontinental run," adding that this is what "makes it special from other marathons in the world."

The Istanbul road race has three categories: a marathon, a 10-kilometer run and a 15-kilometer run. A free 8-kilometer Fun Run will allow people to casually run or just walk along the Bosporus.

The event has been a surprising success given the difficulties finding space for regular running in the heaving, hilly metropolis. While all the races will start on the Asian edge of the Bosporus Bridge, the marathon will end on the historical European peninsula where the Blue Mosque and Hagia Sophia are located. The 15-kilometer and 10-kilometer races will end in the Eminönü district, while the Fun Run will finish in front of Dolmabahçe Palace, home to the last six Ottoman sultans.

The marathon is also the only legal chance for people to cross the Bosporus Bridge on foot.

Despite Yum's enthusiasm, he has yet to equal the achievements of Guinness World Record holder Larry Macon who ran 239 marathons in a year in 2013.

Nevertheless, his performance on Sunday will be Yum's 68th race in the last six years. He generally runs in costume, as in his last marathon in Athens on Oct. 8 when he dressed as Greece's legendary soldier Pheidippides who ran the first 26-mile dash from a battlefield near Marathon to Athens in 490 B.C. "It was a Las Vegas version of it," Yum adds.

Yum started running in 2005 and began taking part in marathons in 2010. Racing is an addiction for Yum. "Running produces endorphins so it is proven medically that when you exercise, your body produces endorphins and that makes you happy," he says. "So, whenever we cross the finish line we have these high feelings, and we are so happy and that makes us addicted to it."

Girish Mallya from India is another runner who agrees with Yum. "I don't run for exercise. I run because I enjoy it," he says: "It makes me happy. It makes me feel good and clears my head, helps my thinking process. I get my best ideas when I am running because that is the time when you are actually free, no distraction (...) just with yourself."

A publisher by profession, Mallya started running at the age of 15, beginning with short distances of three and five kilometers. "In India there is no running culture," he says. Similar to Turkey, there were no marathons in his country when he was young. "The first marathon took place 14 years ago back in India," he says, adding, "I participated in the first full marathon and that is when my journey began." Mallya picks races in exotic places or looks for some cultural angle. "I did my homework on it [the Istanbul marathon]. It is the only marathon that spans two continents," he says. Mallya and Yum are just two of this year's participants.

"We have received 25,000 applications so far," says İsmail Özbayraktar, general manager of Istanbul Municipality's sports body, which organizes the marathon.

Özbayraktar adds that the organization opened up 5,000 more places to meet the large demand.

According to Özbayraktar, around 60 elite athletes will be racing on Sunday.

Some of the top runners competing in the women's category are Ethiopian-origin Turkish citizen Sultan Haydar who finished third in the 2012 and 2013 Istanbul marathons and Amane Gobena from Ethiopia, who took second place in the 2012 race.

In the men's category, athletes such as Elijah Kiplagat from Kenya and Debebe Tolossa from Ethiopia will race on Sunday.

While some athletes run for a living, for most a marathon is a good opportunity to travel.

Malaysian runner Yum travels for running as well: "All my travels are for my runs only. I just chose a place to go because there is a run there; if not I would not go."

"I still have two more continents to go - South America and once I have done it I should be thinking about Antarctica, the last continent, the last frontier," he says with an arched smile.