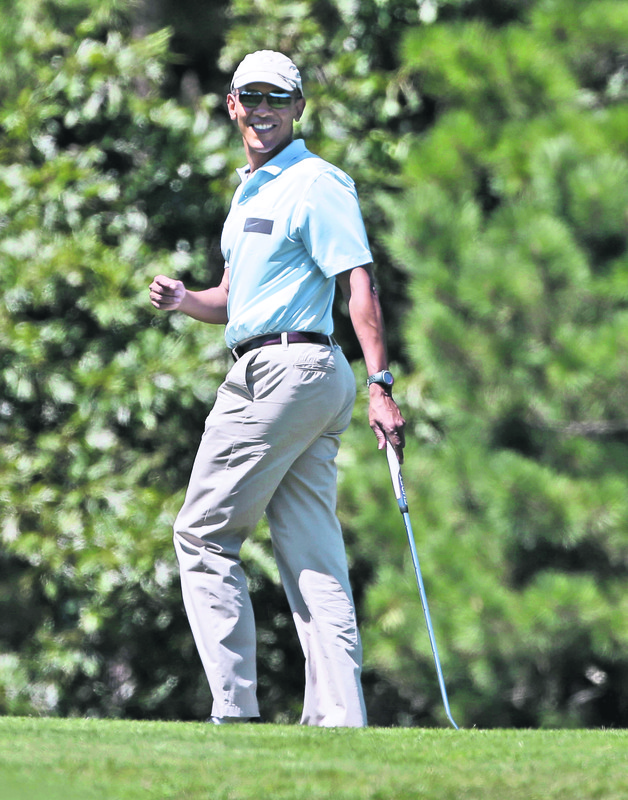 With U.S. President Obama planning to hit a golf shot in Belek during the G20 Summit, the Turkish golf sector is expecting golf tourism to boom after the summit

Turkey will be hosting several world leaders during the 2015 G20 Summit taking place at the heavenly golf and tourism destination of Belek, Antalya on Nov. 15 and Nov. 16. Like other sectors, the golf tourism industry is hoping to benefit from the free publicity and marketing generated by the G20 Summit. And the best way to promote golf tourism in Belek is to have world leaders, especially U.S. President Barack Obama, hit a few shots during the G20 Summit. Accordingly, just like the previous summit in Brisbane in Australia, Obama plans to play golf during his visit. The money raised from these events will be donated to charity. Obama is expected to play golf at the Kaya Palazzo Hotel, which was chosen as the press center of the summit and will host nearly 3,500 media reporters.

Burak Kaya, chairman of the board of Kaya Palazzo, said, "A 'Tent for Cultural Events' has been erected on a 5,500 square-meter space in front of our hotel. Here, Turkish culture will be introduced to foreign leaders. In front of the tent, U.S. President Obama will hit a golf shot. Even one shot by Obama is very important for Turkish golf tourism. We will be showing the golf world how great Belek is. In the future, we expect that the income of hotels in Belek will increase thanks to the G20 summit."

Previously, Turkey's most important promotion as a golf destination was done by the world's former top golfer, Tiger Woods, in 2013. Woods hit a golf shot across the Bosporus - from Europe into Asia - while in Istanbul.

Belek has already attracted 5 million tourists thanks to its luxurious hotels, clean beaches, golf courses and virgin nature. It hosts millions of tourists during all seasons with its 37 accommodation facilities and 10 golf courses. Turkish golf authorities expect that the summit will increase awareness about Turkish golf courses and increase the number of golf tourists Turkey attracts. The best golf courses and resorts in Turkey are located in Antalya and, more specifically, in Belek. The region has become known as the golfing center of Turkey as its home to more than half of all of Turkey's golf courses.

"The G20 Summit is a very important opportunity for promoting Belek. There are many tournaments that are held here in Belek. After such a big summit, many more golf tourists will come to Belek. Turkey's tourism sector has been growing rapidly and will gain from golf tourism too," said Turkish Golf Federation President Ahmet Ağaoğlu.

Turkey's international reputation as a golf paradise has grown recently. Turkey has 27 golf courses in total, including 18 championship courses, according to data from the Culture and Tourism Ministry. Twenty-three out of these 27 golf courses fall are operated by the Development Zone of Tourism Center and Culture and Tourism Protection. Turkey ranks 21st among European countries and fourth among the Mediterranean Basin countries for golf courses. The popularity of golf in Turkey has risen considerably over the past decade.

Turkey was also announced as the rising star of golf destinations in a KPMG report announced at the Turkish Airlines Open 2015. It has moved from 12th in the world in 2004 to sixth in 2014 in terms of numbers of golf tourists attracted. The country now receives 12 percent of its GDP through the travel and tourism sector, and golf is playing an increasingly significant role in Turkey's appeal to tourists. Since 2004 the number of golf clubs in the area has tripled, and the number of rounds played is now over two and a half times higher. In 2014 an extraordinary 513,000 rounds of golf were played the in the region and KPMG found that Belek now ranks as the top performing golf destination in the whole of the Mediterranean.

During the G20 Summit, various golf events will be organized in Belek. Here are the courses:

Antalya Golf Club is one of Belek's leading golfing complexes and it's attached to the 440-room Sirene Belek Golf Hotel. Residents and visitors are able to choose to play one or both of two sensational 18-hole layouts - the PGA Sultan and the Pasha. The courses wind their way through woods, up and over sandy banks and around crystal clear ponds that were once swamps. Water features at half the holes on each course and there are a good number of pot bunkers to be negotiated on fairways and around putting surfaces. The front nine on the PGA Sultan ends with a classic risk/reward hole, a 362-yard, par four, named, appropriately enough, "The Choice." A brave tee shot must flirt with water on the left to set up an easier second shot while a safer drive down the right will result in adding two clubs to the approach. The next six holes - from "The Keyhole" to "The Long Fellow" - are all demanding par fours, with the long, narrow, 476-yard, 12th one of the toughest to be found on any of the Belek courses. As the club themselves say of this hole, "be proud of a par here." The round ends with a 448-yard, par four hole called "Looking Back." Water either side of what is effectively an island fairway pressurizes the drive as there is little margin for error if the tee shot is to remain dry on the short grass. The green is surrounded by five bunkers so an accurate second shot is as essential as the first one from the tee box.

Carya in Belek is the first classic, heathland style golf course to be built on Turkey's Mediterranean coast. It is a championship golf course set on undulating sand hills and cutting through mature pine and eucalyptus forest, at the heart of Turkey's golf coast. The 7,100 yard, par 72 course is a demanding test of golfing strategy with free flowing holes that run between pine and eucalyptus trees and across a dramatic sand ridge. Carya also boasts a spectacular new clubhouse and state-of-the-art driving range.

Gloria's 'Old' Championship Golf Course is nestled among pine trees. The course is studded with natural foliage and enveloped in a cocoon of peace and privacy, allowing you to focus on shots and the finer points of games. Gloria's "New" Course has proven to be a favorite among golfers since 2005. In 2007, the course was the site for the European Seniors Tour Classic, and in 2012, the World Amateur Team Championship. Gloria Verde Golf Course, one of the top nine-hole courses in all Europe, is located among natural pine trees. Both seasoned pros and amateurs are at home on the Verde Course as it offers both challenging holes to test the game, as well as holes that are designed to help improve technique.

The National Golf Club opened in the autumn of 1994. The course is routed across gently rolling terrain and slips through mature pine and eucalyptus trees. The snow-capped Taurus Mountains provide a provocative backdrop especially as the course is bathed in hot sunshine for the vast majority of the year. The National stretches out to almost 6,300 meters from the tips and it was the host venue for the 1996 and 1997 Turkish Seniors Open.

Following on from the PGA Sultan and Pasha courses at Antalya Golf Club, the Montgomerie Maxx Royal (formerly known as the Papillon Golf Club) is the third European Golf Design project in the Belek area with Colin Montgomerie marketed as the course's attention-grabbing headline designer. Monty's 18-hole layout is part of a multi-million euro golf and hotel development that includes a world-class golf academy and a five-star hotel. The course opened for play in 2008, quickly establishing itself as one of the best in an area that's not short of quality new golfing facilities. Many of the fairways play through mature pine forest and with eight lakes on site there are several water hazards to be avoided during a round. In November 2013, the Montgomerie Maxx Royal hosted Turkey's inaugural European Tour event - the Turkish Airlines Open by the Ministry of Culture and Tourism. Frenchman Victor Dubuisson hung on to win the 2013 event, securing his maiden European Tour title by two shots from Jamie Donaldson with Justin Rose and Tiger Woods finishing two strokes further behind. Colin Montgomerie made his 600th European Tour appearance in the 2014 Turkish Airlines Open, but it was Brooks Koepka who lifted the title after beating Ian Poulter by one shot.