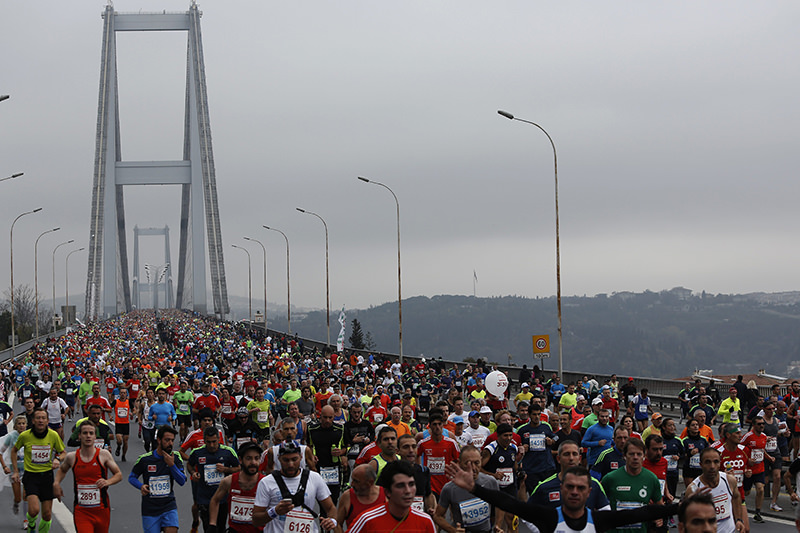 African athletes garnered the top titles in the 37th Istanbul Marathon, which offered the yearly chance to walk or run across two continents

Athletes from African countries continued their winning streak in the 37th edition of the Istanbul Marathon, the world's only intercontinental race that spans from Asia to Europe.

For residents of Istanbul, the race was a once-in-a-year chance to walk or run across the Bosporus Bridge, one of the busiest locations in the city at any given time.

Two Russian athletes, who signed up for the marathon, were barred from the race after the International Association of Athletics Federation (IAAF) voted on Friday to suspend the Russian Athletics Federation from the sport after allegations of widespread and state-sponsored doping surfaced.

The marathon, whose theme for this year was "End Violence Against Women," started at 9:00 a.m. on the Asian side, a few hundred meters away from the bridge. A French flag was hanged on the bridge during the marathon in memory of the victims of the Paris terror attacks. Runners raced through Beşiktaş on the European side of the Bosporus to the historic districts of Karaköy and Eyüp before they reached Bakırköy. They then headed to the square where Istanbul landmarks Blue Mosque and Topkapı Palace were located through a race across the coastal strip. The finish line was Horse Square, or the Hippodrome as it was called in ancient times, a Byzantine-era center for sports and recreation that hosts a number of ancient obelisks.

Some 30,000 athletes from 120 countries signed up for the three races of the marathon, which include a 42 kilometer run, a 15 kilometer run and a 10 kilometer run. Elite athletes from Kenya, Ethiopia, Eritrea, Belarus, South Africa, Russia and Ukraine were among the runners. The winners were awarded $50,000.

For most locals, the marathon was merely a weekend getaway. Hundreds of people took their time to cross the bridge to the seaside districts on Istanbul's European side before reaching Dolmabahçe, where the eponymous Ottoman palace is located in the 8-kilometer Fun Run open to public.

Some brought their dogs to the race while a man joined the walk with his lamb. Others had the rare opportunity of sipping tea and devouring simit, or sesame bagel, the traditional Turkish snack, against the backdrop of a breathtaking view of the Bosporus while a man proposed to his girlfriend on the bridge.
Last Update: Nov 15, 2015 5:46 pm