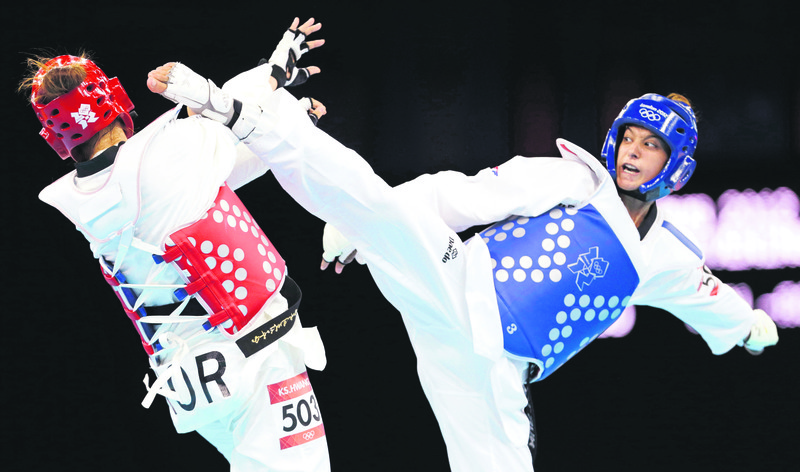 A total of 86 athletes qualified for the Rio 2016 Olympics and Paralympics, which will be held in August in Brazil, as Turkey looks forward to a victorious comeback after a disappointing streak at the 2012 London Olympics.

The qualifications will end in May 2016 and more Turkish athletes are expected to join the roster of Turkish teams.

Athletics has the most Turkish athletes at 14. Four will compete in shooting, wrestling and weightlifting while three will vie for medals in sailing. Turkey will send off two athletes for each category of taekwondo, swimming and boxing while it will be represented by only one athlete in kayaking. Athletes from all around the world will compete for 306 medals in 28 events at the Olympics between Aug. 5 and Aug. 21.

Turkey garnered two golds, two silvers and one bronze medal at the 2012 London Olympics where 114 Turkish athletes competed in 16 events.

Here is a summary of athletes who qualified for Rio: Erdinç Kebapçı and Yavuz İlnam will compete in trap shooting while İsmail Keleş and Yusuf Dikeç will vie for medals in the 10 and 50 meter air pistol shooting event.

In athletics, Sultan Haydar and Nilay Esen will compete in the marathon. Haydar, a 30-year-old Turkish Ethiopian athlete, is the holder of the Turkish record in the best individual performance in women's marathon in Paris in 2012 at 2:25:09. She also garnered a gold medal at the Europe Under-23 Athletics Championship in 2009. In the men's category, Bekir Karayel will run in the Olympics marathon while Ali Kaya, Tarık Langat Akdağ, Ramil Guliyev, İlham Tanui Özbilen, Jak Ali Harvey, Tuğba Güvenç, Özlem Kaya, Halil Akkaş and Yasmani Copello Escobar will compete for medals in the 10,000 meters, 100 meters, hurdles, steeplechase races for men and women. Emel Dereli will represent Turkey in the women's discus throw while Kıvılcım Kaya Salman will compete in the hammer throw.

In boxing, Adem Kılıçcı and Onur Şipal will compete in the middleweight and welterweight categories in men's boxing respectively. Kılıçcı, who missed out on a medal in London after he secured the fifth place, has medals in the world and European championships under his belt. Onur Şipal boasts a silver and bronze medal from the Summer Universiade in 2013 and the World University Boxing Championships in 2010.

In taekwondo, Servet Tazegül will represent Turkey in the men's category and Nur Tatar will compete in the women's.

Rıza Kayaalp, gold medal winner in the wrestling in the 2015 European games and winner of the heavyweight Greco-Roman title in September's world championships, will join Taha Akgül, the heavyweight champion at the Wrestling World Championships. Seventeen-year-old Viktoria Zeynep Güneş, who brought Turkey its first gold medal in swimming at International Swimming Federation World Championship this year, also qualified for the Rio games.

Beytullah Eroğlu, who came seventh at the 2012 London Paralympics, qualified for the swimming event while Neslihan Kavas and Nazmiye Muslu Muratlı will compete in table tennis and weightlifting respectively at the Rio Paralympics.

Turkey, which first participated in the Olympics in 1924, won its first medals in the 1936 Olympics in wrestling. In the 1960 Rome Olympics, Turkey won seven gold medals, the highest in its Olympic history. The country made its mark at the 1988 Seoul Olympics when Naim Süleymanoğlu won the country's first gold medal in weightlifting, an event other than wrestling Turkish athletes are lauded for. Since then, except at the 1996 Atlanta Olympics where the country garnered four gold medals, Turkey's Olympics record has been less than impressive with athletes securing mostly bronze medals.
Last Update: Dec 11, 2015 1:05 am
RELATED TOPICS