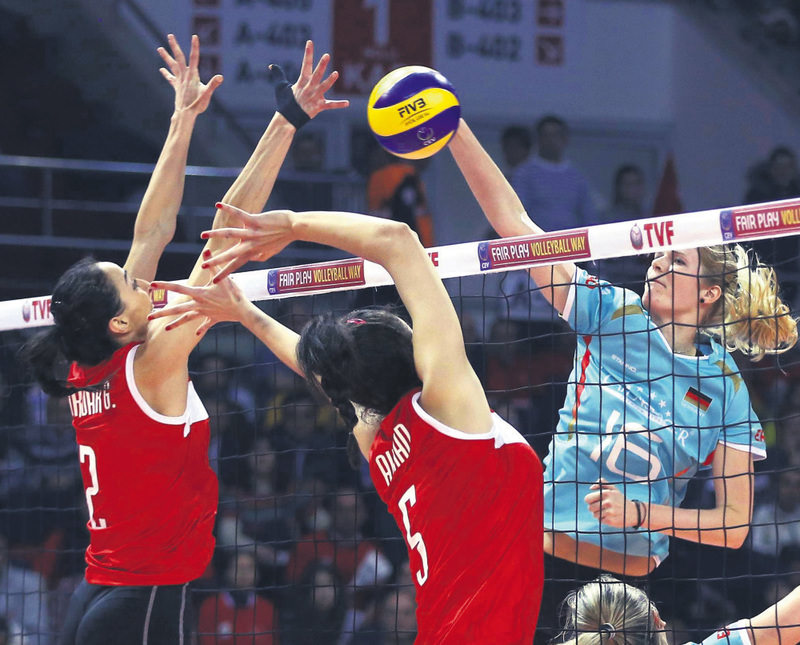 Germany and Turkey faced off in Pool A on the second day of the women's European Olympic Volleyball Qualifier. After a dramatic and close start to the match, the home heroines of Turkey built their 3-1 victory on a foundation of 17 block points

Turkey opened the European Olympic Qualifiers with a win over Germany. Germany began their quest for success well and were up by four points at the first technical time-out, 8-4. Little by little the Turks reduced the lead, and coach Ferhat Akbaş' team were 16-15 ahead by the second technical time-out. The predicted drama escalated as Turkey levelled the score at 23-23 having been three behind. Germany wasted two set points, before the capacity hall went crazy as Turkey took the set 27-25.

The drama continued in the second set. Germany were ahead 8-7 at the first technical time-out, but Turkey's Kübra Akman and Naz Aydemir Akyol formed a wall and blocked the Turks back into the set and in front 16-14 at the second technical time-out. Most people had Turkey as winners of the second set when they were 23-19 in front, but then Germany's Anja Brandt served. The 195cm middle blocker put Turkey under severe pressure, as she got to launch the Mikasa seven times in a row. Together with her teammates Germany dismantled the Turkish lead, and Christiane Fürst secured the German win at 25-23 with two straight blocks. On one side of the net Germany coach Felix Koslowski changed the libero, so Lisa Thomsen replaced Lenka Dürr from the beginning of the third set. On the other side, the instructions from Akbaş must have been very clear: go out and show that the second set loss was a one-off. Turkey were determined to fulfil that game plan and were guided by the safe hands of setter Aydemir Akyol. Turkey quickly wrapped the set up 25-16.

Felix Koslowski became more and more frustrated on the sideline in his search for a response to the powerful Turkish offensive that led the hosts to an 8-2 lead and 16-9 lead at the second technical time-out in the fourth. No matter how hard he tried to tell his team to keep playing and believe in themselves the results never came. The Turkish win was never in doubt, even though they relaxed at the end of the set. They prevailed 25-17.

Turkey's Eda Erdem Dündar: "I think we served really well today and honestly we blocked amazingly. I think we made 17 block points and that was the key to the game. It was also very important that we did not stop playing having lost the second set. Everybody gave 100 percent." "We also have the home advantage," she added. "This arena is magic for us and we almost always win here with all the amazing fans cheering for us."

Germany captain Magareta Anna Kozuch: "It really was a pity that we lost the first set after having two set points. I think we commanded the match until the third set.