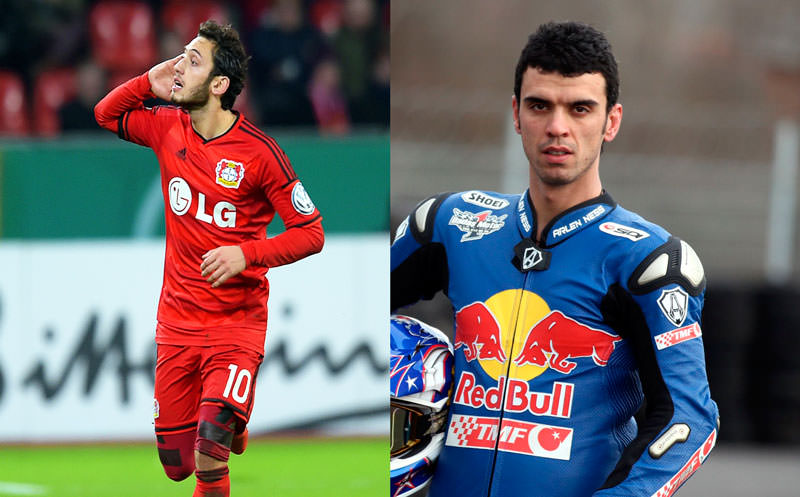 World champion motorcyclist Kenan Sofuou011flu (R) and famous midfielder Hakan u00c7alhanou011flu.
by daily sabah Jan 07, 2016 12:00 am
Turkish world champion motorcyclist Sofuoğlu had the sole intention of getting to know more about another prominent Turkish sportsman when he went to Cologne. He wanted to have a little talk with Hakan Çalhanoğlu, a successful offensive midfielder playing in Germany's Bayer Leverkusen.

Yet, he received a cold response to his efforts to reach out to the footballer. Çalhanoğlu could not remember Sofuoğlu's name at first, considering him a total stranger and responded in a cold blooded manner, saying "How did you find my number? I don't know you, why do you want to meet me?"

Offended by the response, the world-famous motorcyclist replied with a message which said "Brother, don't worry. I will delete your number," and an Instagram post with a screenshot of the messages, in both of which he expressed his reproach.

Nevertheless, the dispute has been settled, the midfielder stated on Tuesday. "Mr. Sofuoğlu and I are both working for the success of our country in the field of sports. I have called Mr. Sofuoğlu, there is no problem between us. Only a communicational problem happened while messaging. I am looking forward to hosting him in a match in Germany," Çalhanoğlu said in a Facebook post.

A while after Sofuoğlu shared the post, he said that it was a "wrong choice out of resentment" and deleted it. Upon the settlement of the 'whatsapp feud', the World champion said that he wanted to reach Çalhanoğlu because he liked the footballer's lifestyle and behaviors and attempted to get to know him as he was in Cologne, a city very close to Leverkusen where the midfielder lives and plays for the local team. "We have settled the matter with Hakan, there was a problem in verbal communication," Sofuoğlu concluded.
Last Update: Jan 07, 2016 7:57 am
RELATED TOPICS