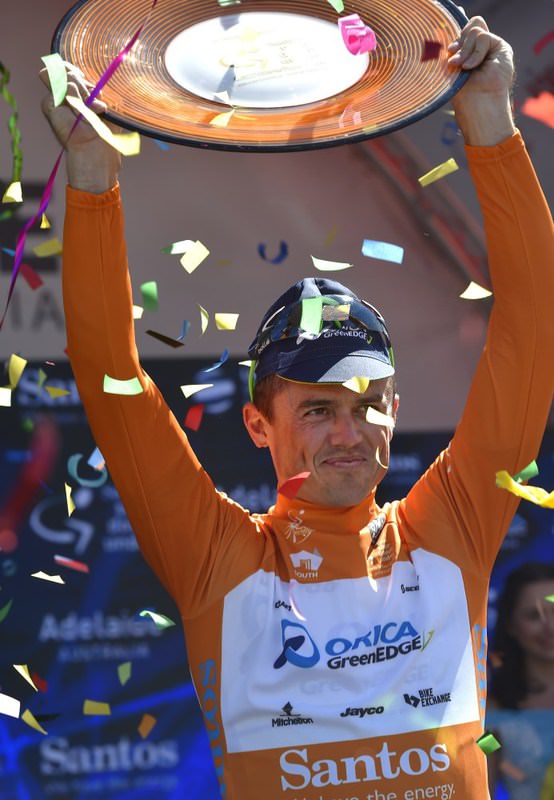 by French Press Agency - AFP Jan 25, 2016 12:00 am
Australian Simon Gerrans (above) claimed a record fourth Tour Down Under when he finished safely in the peloton after the 90-kilometer final stage on Sunday. Gerrans finished the International Cycling Union (UCI) season-opening race 9 seconds ahead of fellow countryman Richie Porte of BMC Racing. Colombia's Sergio Henao from Team Sky was third overall, 11 seconds behind Gerrans. Gerrans' Orica Greenedge teammate Caleb Ewan won the final stage in a sprint finish, adding to his victory in the opening stage on Tuesday.

The powerful Ewan surged for the line 80 meters out, winning by a bike length ahead of Australia's Mark Renshaw of Team Dimension Data and Italian Giacomo Nizzolo of Trek-Segafredo. The day's racing, however, belonged to Gerrans, whose 9-second overnight lead meant he only had to stay out of trouble Sunday to ensure a win in the general classification. Gerrans has been a dominant force at the Tour Down Under, winning previously in 2006, 2012 and 2014. He staked his claim for this year's race when he won the third stage to Campbelltown, then backed it up with victory in a sprint finish in the fourth stage at the seaside town of Victor Harbor. "We had a dream run this race," Gerrans said.
RELATED TOPICS