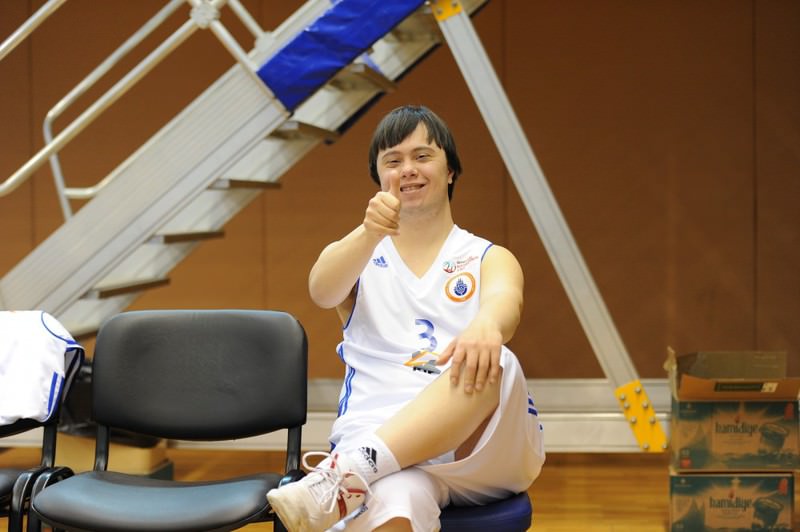 On Saturday in a Spor Toto Basketball League (BSL) matchup at Cebeci Sports Arena in Istanbul, Istanbul Büyükşehir Belediyespor (7-15) earned a critical 89-74 win over Trabzonspor Medical Park (9-13) in front of some of the club's biggest supporters. In conjunction with World Down Syndrome Day, celebrated internationally on March 21, Istanbul Büyükşehir Belediyespor signed Ali Uçar, a young man with Down syndrome, on March 17. He joined the team on the bench throughout Saturday's game.

"We made a transfer for someone more valuable than the star players on our roster," İstanbul Büyükşehir Belediyespor Chairman Bahattin Ulusan said in reference to Uçar.

At halftime Uçar and twelve other young people with Down syndrome took the court for a 5-minute exhibition game. In the second half Istanbul Büyükşehir Belediyespor gave the fans in attendance an additional reason to smile.

Istanbul Büyükşehir Belediyespor entered the third quarter with a 41-38. The teams stayed close in the third quarter, but the hosts outscored Trabzon 23-12 in the final period to seal the win. Jaka Klobucar had a team-high 17 points on 5-7 shooting from the field, while forward Ben McCauley chipped in with 15 points in the win. Dwight Hardy, one of the BSL's top scorers, finished with a game-high 25 points in a losing effort. It was a tough loss for Trabzonspor Medical Park, which is in the thick of the battle for one of the BSL's final playoff spots with 8 weeks remaining in the regular season. Two wins separate Trabzonspor Medical Park and Muratbey Uşak Sportif (11-11), which would secure the eighth and final BSL playoff spot if the season ended today. Istanbul Büyükşehir Belediyespor is currently in 13th place, battling to avoid relegation to the Turkish Basketball League for the 2016-2017 season.