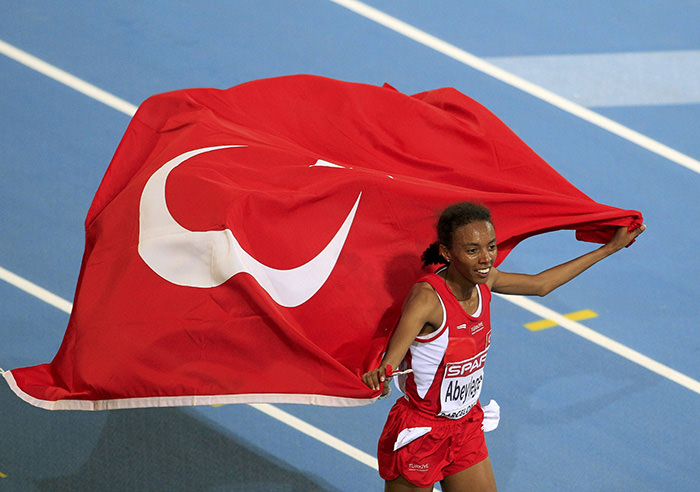 Elvan Abeylegesse of Turkey celebrates after winning the women's 10,000 metres final at the European Athletics Championships in Barcelona July 28, 2010. (Reuters Photo)
by Anadolu Agency
Mar 31, 2016 12:00 am

The disciplinary committee of the Turkish Athletic Federation has banned Turkish runner Elvan Abeylegesse for two years, it was announced on Thursday.

Abeylegesse had tested positive for using drugs in the 2005 and 2007 world championships. However, the Ethiopian-born athlete later sued the International Association of Athletics Federations (IAAF) for its "technical failures" in her retrospective analysis.

Abeylegesse appealed to the Monaco administrative court, claiming the international association had made mistakes in her retrospective analysis of her urine samples from the 2005 and 2007 championships.

Her agent Önder Özbilen dismissed the decision of Turkey's federation.

"The decision of the disciplinary committee of the Turkish Athletic Federation is unlawful while the case in Monaco is underway," Özbilen told Anadolu Agency.

A doping malady has overshadowed Turkish athletics over the past eight years amid authorities' efforts and regulations intolerant of doping offenses.

Süreyya Ayhan Kop and Aslı Çakır Alptekin were among stellar athletes who have been banned from the track either temporarily or permanently for doping use over the past years. Along with Turkish-born athletes, naturalized citizens competing for Turkey face bans and suspensions over doping offenses. South African-born and naturalized Turkish long-distance runner Karin Melis Mey, who was third in the long jump at the 2009 World Championships, was forced to abandon competitions when she was found to have doped at the 2012 Summer Olympics. She received a two-year suspension over the first offense.

Ethiopian-born Turkish long-distance runner Alemitu Bekele, who achieved national and world championship golds in the women's 1500m and 5000m, was banned from competition for four years in 2013 on the grounds of irregularities found on her biological passport. Her punishment was reduced to one year and three months after she appealed to the Court of Arbitration for Sport (CAS) arguing that abnormal values in her blood stemmed from malaria.