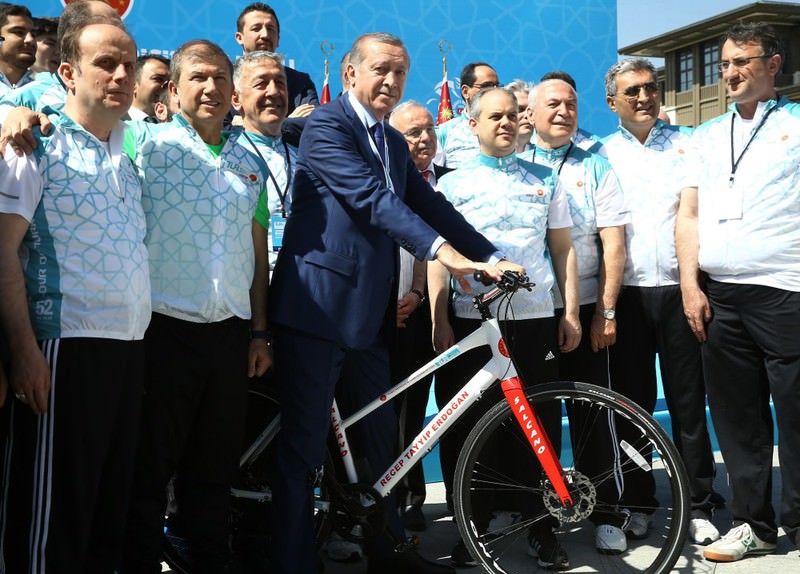 by Daily Sabah Apr 07, 2016 12:00 am
A strong advocate of healthy living, President Recep Tayyip Erdoğan took center stage on Wednesday at an event promoting the 52nd Presidential Cycling Tour of Turkey, an international tour set to begin on April 24.

At the presidential complex in Ankara, Erdoğan welcomed representatives of Turkey's cycling federation and a group of athletes including Kenan Sofuoğlu, an award-winning professional cyclist who traded his motorcycle for a bicycle at Wednesday's event.

Erdoğan praised the tour as an event which brings together riders from different cultures and faiths. "It is inspiring and should be a guideline for world leaders on how to come together for a common purpose regardless of differences, to resolve the world's problems," said the president.

The Presidential Cycling Tour was launched in 1963, becoming an international event in 1965, and given the "presidential" title in 1966. "It became a well-established sporting event after the presidency started sponsoring it. I personally endorse the event, because it serves to promote our country and endear people to cycling," he said. "The competition in cycling shows what we need in resolution of political, social and economic problems and that is, we should progress rather than being destructive."

The presidential tour will kick off on April 24 in Istanbul. Six stages will see cyclists from Turkey and other countries compete along scenic routes, from ancient Cappadocia in central Turkey -- known for their "fairy chimney" rock formations - to the Mediterranean resort towns of Antalya and Marmaris. The tour will end on May 1.

Cycling in Turkey has seen a revival recently, as the government has focused on a campaign for healthy living. In an effort to battle obesity and promote physical activity, the government started distributing bicycles to students last year, hoping to promote their use.
RELATED TOPICS