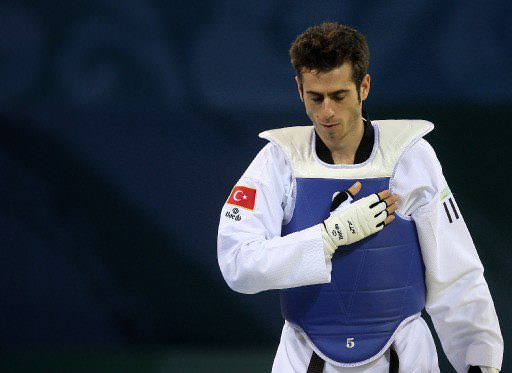 by Anadolu Agency Apr 22, 2016 12:00 am
Turkish taekwondo athlete Bahri Tanrıkulu hopes a wild card for Palestine would enable him to compete for the country in the upcoming Olympics in the Brazilian city of Rio de Janeiro.

Speaking to Anadolu Agency on Wednesday, Tanrıkulu, who is a former world champion and 2004 Olympics silver medalist, said: "I have not participated in any international competition for Turkey since the 2012 London Olympics, which allows me to compete for Palestine," Tanrıkulu said.

According to the rules of taekwondo, an athlete can play for any international team if the athlete has not competed for their national team in three years.

"I did not want to stay insensitive to what is going on in Palestine. I want to be supportive of them," he said.

"Our president and prime minister knew about my situation, they declared their full support for me when I told them about my decision," he added.

When Tanrıkulu competed for Palestine in the Asian qualification rounds of the Rio Olympics, he won bronze. But even though he won a medal for Palestine, he remained ineligible for the Rio tournaments. According to rules, he needed silver or gold in order to qualify. But the Turkish athlete has not yet given up and is now pinning his hopes on a wild card.

"I won Palestine's first bronze medal in taekwondo. The International Olympic Committee is planning to give Palestine a wild card berth," he said.

If the committee decides to give Palestine a wild card, then "I'll be in the Olympics again at the age of 36. I would like to set a model for Turkish and Palestinian athletes," he added.
Last Update: Apr 22, 2016 1:38 am
RELATED TOPICS