52nd Presidential Cycling Tour of Turkey kicks off in Istanbul 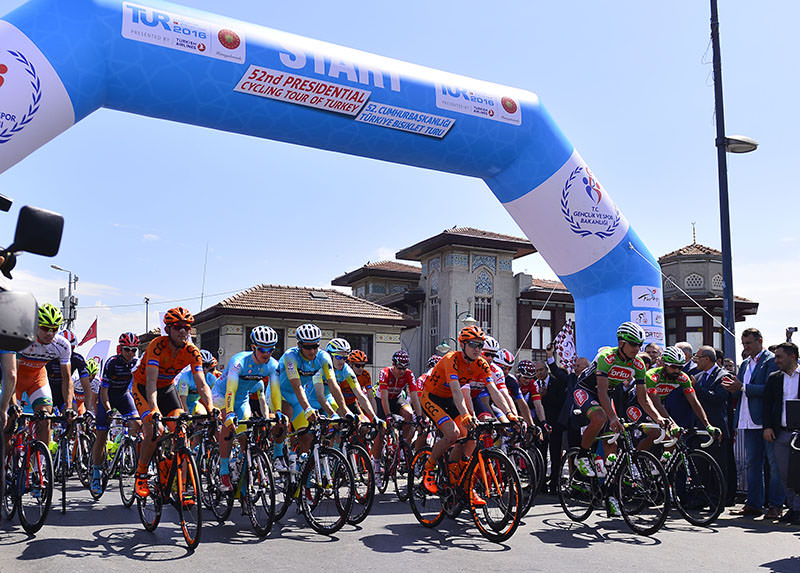 The 52nd Presidential Cycling Tour of Turkey has started Sunday with the first Istanbul-to-Istanbul stage.

The riders departed from the Beşiktaş district on the European side and will tour to Beykoz on the Asian side via the Bosphorus Bridge, and rode back to the European side to complete the race. Certain roads were closed to traffic, which resulted in delays for some Istanbulites.

Polish cyclist Przemyslaw Niemiec from Italy's Lampre-Merida team has won the 129.2-kilometer-long stage and came first in front of 122 other cyclists in 3 hours, 10 minutes and 19 seconds.

Portugal's Jose Goncalves riding for the Spanish Caja Rural-Seguros RGA team came in second in the race with only eleven seconds behind Niemiec, while Italian cyclist Marco Zanotti from Holland's Parkhotel Valkenburg Continential came in third in 3 hours, 10minutes and 35 seconds.

Organized traditionally by the Turkish Cycling Federation, the Presidential Cycling Tour of Turkey started in 1963 as the Marmara Tour and gained an international status for the first time in 1965.

The 52nd tour will unfold in eight stages between April 24 and May 1.

Unlike previous years when the last stage was held in Istanbul, this year the tour started in Istanbul and ends in the western province of İzmir's Selçuk district on May 1.

By the end of the eight-day-long race, 128 cyclists will have ridden over 1,250 kilometers in Turkey's Aegean, Mediterranean, and Central Anatolian regions.

The Turkish Cycling Tour will be broadcast live on national and international channels in more than 120 countries.

The tour route will be as follows: