Website brings together Germans and migrants to meet and integrate 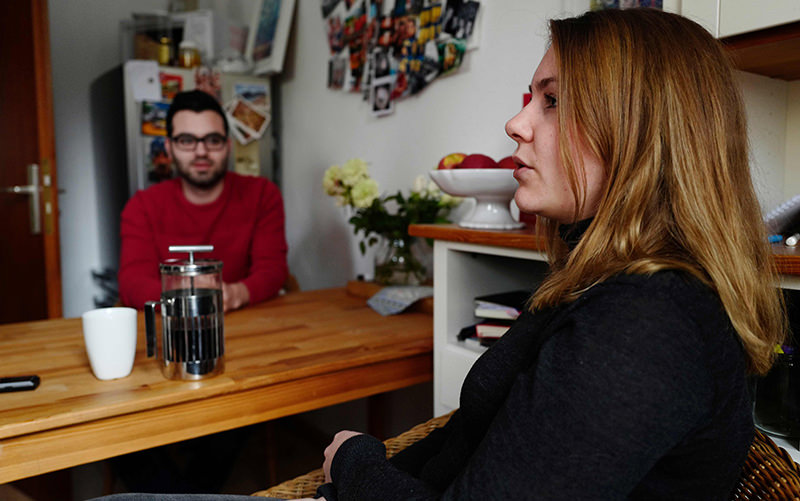 During the height of the migrant crisis in Europe last fall, Lasse Landt came to a startling realization.

Thousands of migrants were pouring into Germany every day, but the 36-year-old startup consultant from Berlin hadn't met a single one of them.

"It was all over the media, every day on the talk shows you had people talking about the refugee crisis. I had never seen a refugee," said Landt. "I just wanted to find out if it was real."

His experience is typical for most Germans, and many have volunteered with charitable groups in part to meet the migrants they're hearing so much about. But Landt went further — and the result is a kind of dating website for Germans and migrants, albeit without the romantic aspect.

Together with Khaled Alaswad, a 25-year-old Syrian he met at a computer coding class for migrants in Berlin, Landt started a project to help refugees and locals meet up. Called Let's integrate! , it allows users to pick a time and location and set up a "date."

The idea is to set as low a hurdle as possible for the meeting. No preparation is needed — people just need to show up and hopefully have a good conversation. Or if the language barrier is too high, have a conversation with hand signals.

Alaswad said his friendship with Landt has helped him land on his feet in Germany.

"If the refugees never talk face to face with a local person, they will never know anything about the culture here," he said. "There is just such a big difference between our culture and the German culture."

Germany registered around 1.1 million irregular migrants in 2015, most of them refugees from Syria, Iraq and Afghanistan. But with the closure of the Balkans migration route from Greece to Germany, the number of migrants coming in has dropped dramatically this year. So attention has now shifted to integrating the refugees, who will most likely spend several years, if not their whole lives, in Germany.

The authorities are focusing on having migrants learn the language and get jobs. The German government has promised to introduce subsidized workplaces earmarked for refugees.

"In Germany, we have a very technocratic view of integration," said Landt. "It is basically, you do a language class, you get a job and then you are integrated. But really, it is very much about social contact. Something you can achieve before you wait six months for your language class and another year before you are somewhat fluent."

Let's integrate! was launched May 1 and so far at least a dozen meetings have taken place. More Germans have signed up than migrants, so organizers are putting up posters in refugee homes to try to even out the numbers.

The service is free but only available in Berlin, though there are plans to expand it to other German cities soon, including those where migrants have received a less-than-enthusiastic reception. Fears about migrants have been stoked by far-right and nationalist groups, who have staged hundreds of rallies near refugee homes or planned shelters.

To identify each other at the meeting point, people are asked to hold up their index finger and thumb to make an L and I — for Let's integrate — a bit like a secret hand signal.

One of the first meetings was between two Syrians and two Germans. Abdul Wahab, an 18-year-old Syrian, said he simply did an Internet search for "Integration Germany" and found the page. Ahmed Haj Ali, a 23-year-old refugee from Damascus, found the website on Facebook.

"I want to stay here for a long time," Haj Ali said. "This will help me adapt to their culture and help me learn German."

Haj Ali and Wahab met with Cindy and Paul Spieker, two siblings from Berlin who were also involved in building the website. After meeting at a shopping street in Berlin, the group traveled to a park, where the Germans drank beer and the Syrians enjoyed orange juice.

"When you meet, you realize that they are people like us and there is no need to be worried," he added.