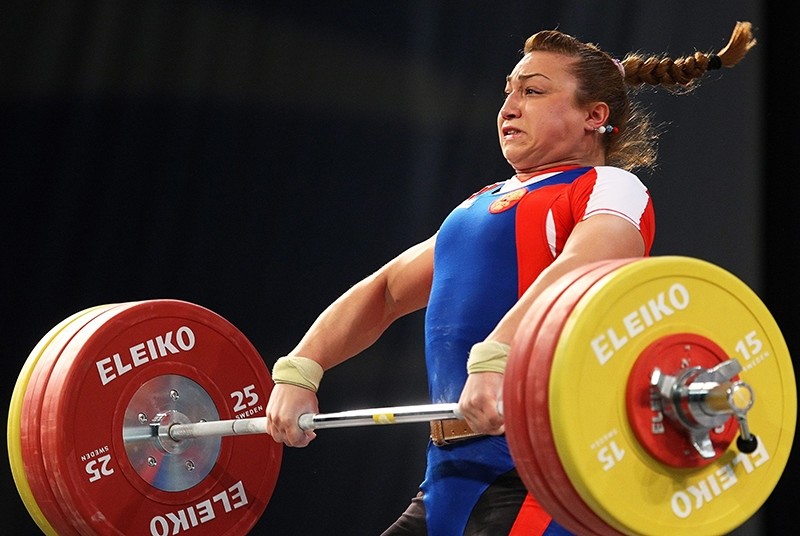 A file picture dated 10 April 2010 of Russia's Nadezhda Evstyukhina competing in the women's 75kg category during the European Weightlifting Championships in Minsk, Belarus (EPA Photo)
by Associated Press Jun 07, 2016 12:00 am

The "B'' samples of two Russian women's weightlifting medalists from the 2008 Beijing Olympics have come back positive for steroids, Russian state news agency Tass reported on Tuesday.

Marina Shainova, who won silver in the 58-kilogram class, and Nadezhda Evstyukhina, bronze medalist in the 75-kg division, were among 10 Russian medalists from Beijing who reportedly tested positive last month in IOC reanalysis of their stored samples.

Shainova's coach, Vladimir Shainov, told Tass that the two lifters have now also tested positive for turinabol in their "B'' samples.

"The document about a further decision has not come yet, but now, of course, they will take away the medal and disqualify. Evstyukhina is in the same situation" he was quoted as saying.

Once a "B'' sample confirms the original positive finding, the International Olympic Committee can open a formal doping case. The two could be stripped of their medals.

Other Russian medalists from the Beijing Games who were reported to have failed retests last month included bronze medalist Anna Chicherova, who won the high jump gold at the London 2012 Games, and Yulia Chermoshanskaya, who won gold in the 4x100-meter relay.

The IOC stores Olympic doping samples for 10 years, so that it can reanalyze them when new testing methods become available.