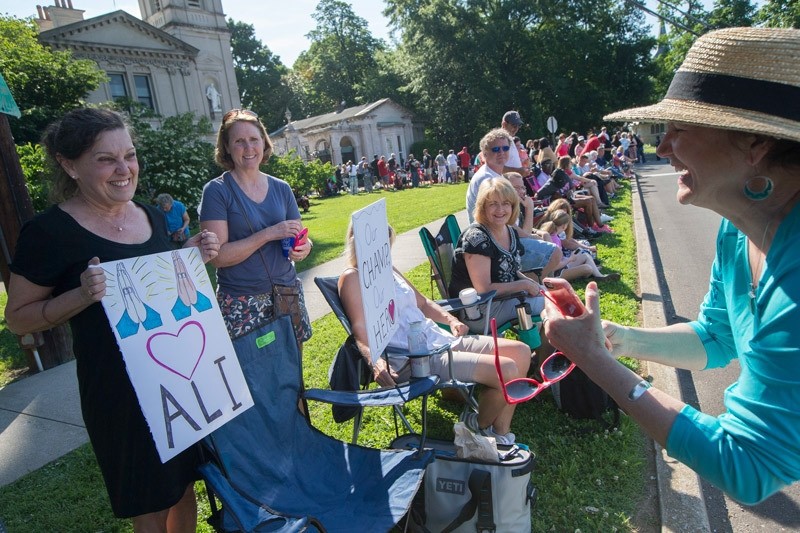 The Latest on the memorial service for Muhammad Ali (all times local):

Hundreds of people are crowding the streets in front of the Louisville funeral home holding Muhammad Ali's body, many squeezing into a neighboring yard to catch a glimpse of the casket.

The scene is a joyous atmosphere, as many hope to say a final goodbye to the boxing champ. Police are blocking off the property to keep people back. Some made signs, and others wore Ali T-shirts.

Thirty-six-year-old Mike Stallings brought his 2 young sons. The family made signs to wave at the start of the processional.

He says: "It's a real reminder of our mortality, to see someone like that so strong and now he's gone.

"As big as he was, he never looked down on people. He always mingled among the crowds."

Takeisha Benedict and her co-workers were color-coordinated as they waited to pay their respects to Muhammad Ali.

The five women wore orange T-shirts with "I Am Ali" printed on them while standing outside the housing office across the street from the Kentucky Center for African American Heritage on Muhammad Ali Boulevard. The long procession was about 45 minutes away from passing by, and they didn't mind waiting in the sun with a late-arriving gathering of people to see The Greatest.

Benedict would've been out here no matter the weather.

She says: "To me, he was a legend to this city and an example to people. I'm just glad to be part of this history of saying goodbye. Opening it up and allowing us to be part of it, we're so appreciative."

Kareem Abdul-Jabbar is in Louisville for the memorial service for Muhammad Ali.

The NBA's all-time scoring leader posted a photo of himself on Twitter standing in front of a makeshift memorial outside the Muhammad Ali Center, with the caption, "And so my day begins ...'.

The center is several blocks from the KFC Yum! Center, where more than 15,000 people, including hundreds of celebrities and dignitaries, are expected to show up Friday afternoon for an interfaith memorial service.

Jenell Weber says she came to Louisville from Santa Clarita, California, to pay tribute to Muhammad Ali, whom she called her "biggest hero."

She flew in Thursday at 6 a.m. so she could attend the prayer service and went to Ali's boyhood home Friday for the processional because she wanted to see where it all started.

She says: "He's so much more than boxing. He is an amazing humanitarian. He stood up for what he believed in when it wasn't a popular thing to do, and he has a soul in his character like gold."

She says she also admired his way of bringing people together, no matter their race or religion.

She says, "We need more people like him to help get the world to come together."

Filipino fans remembering Muhammad Ali gathered near the site of his epic "Thrilla in Manila" fight with Joe Frazier for an art and photo tribute.

The display near Araneta Coliseum at Ali Mall in the Philippines was launched hours before Ali's burial in the United States.

Outside the coliseum, a cutout picture of Ali stands in a boxing ring. Fans crowded around a screen playing videos of the 1975 match that put the Philippines on the map. At the mall, memorabilia including boxing gloves with Ali's autograph, an original souvenir program and a gold commemorative coin also are on display.

The Oct. 1, 1975, heavyweight championship, one of the greatest boxing matches in history, was won by Ali on a technical knockout at the jam-packed coliseum in Manila's suburban Quezon city and was watched by a worldwide audience.

About two dozen people gathered along the road in front of the funeral home where Muhammad Ali's body is being kept. They watched as limousines for the 17-car procession filed into the AD Porter & Sons funeral home parking lot in southeastern Louisville.

Lisa Taylor, who lives down the street, showed up before work to catch a glimpse of the beginning of the procession.

She said: "I just wanted to come out and feel the spirit today. He is Louisville's son, and I wanted to be close to history. People all over the world will be watching. He's a world humanitarian."

Bob Gunnell, a spokesman for the Ali family, said Trump will not be among the guests. Gunnell said Trump "was invited like anyone else was" to the public service. Trump spoke to Ali's wife, Lonnie, and said he was unable to attend.

In December, Trump proposed banning Muslims from entering the United States. Ali, probably the most famous Muslim in the U.S., issued one of his last statements to criticize the proposal, calling on people "to stand up to those who use Islam to advance their own personal agenda."

Gunnell said Friday morning that 300 celebrities and dignitaries will be among the 15,500 in the crowd.

People gathered early outside Muhammad Ali's boyhood home, which was decorated with balloons, flags, flowers and posters for Friday's memorial.

A procession with Ali's casket was to pass by the home Friday morning.

Fans took photos of themselves standing in front of the small pink home with white trim, and standing near a large cloth poster on the lawn decorated with images of Ali, and declaring him "The Greatest."

Some people staked out their place near the home with lawn chairs. Others milled about on foot.

That will be the single word inscribed on the headstone for the boxing superstar.

Ali wanted to be buried in his hometown, where he learned to box and fought his first fight. He also built a museum and the city named a street in his honor.

Former heavyweight champion Mike Tyson is a late addition as a pallbearer at Muhammad Ali's burial.

Ali family spokesman Bob Gunnell says Tyson caught a late flight to be part of the ceremonies Friday honoring Ali in Louisville, Kentucky. Other pallbearers include actor Will Smith and another former heavyweight champion, Lennox Lewis.

The ceremonies will start with a procession that begins at 9:30 a.m., taking Ali's casket past his boyhood home and the museum that honors him.