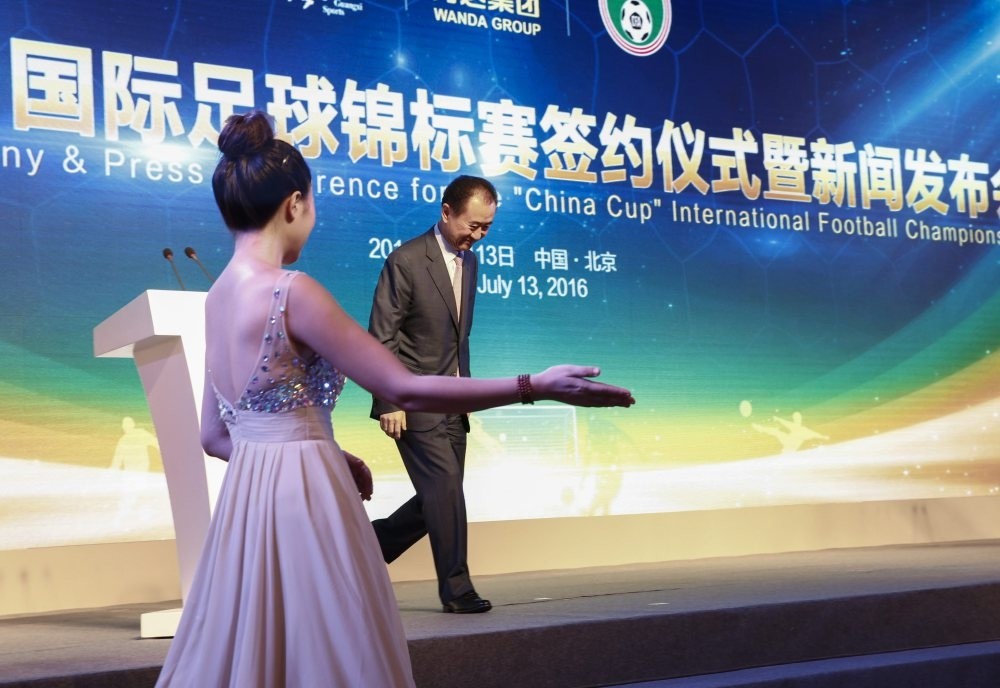 Wang Jianlin, Chairman of Chinau2019s Wanda Group walks off the stage after giving a statement during ceremonies to mark a signing ceremony and press conference for the u2018China Cupu2019 international football tournament in Beijing.
by Jul 14, 2016 12:00 am

China will host an annual national team football tournament starting from next year, entertainment and property conglomerate Dalian Wanda Group said yesterday as it seeks to build a sporting empire. The announcement comes as Chinese companies snap up foreign players and clubs as the country increases its influence on the global game.

The FIFA-approved "China Cup" will kick off in January 2017 with a four-game tournament featuring China and three teams from Europe and the Americas, Wanda said in a statement, without identifying the non-Chinese participants.

The company expects the cup, which Wanda says is a collaboration with the Chinese Football Association and the Asian Football Confederation, to eventually feature eight competitors from "among the world's top-ranking national A teams", the statement said.

China currently languishes in 81st place in the FIFA world rankings, just behind Zambia and Jordan, and Wanda said that Chinese fans were "eager to see their national team rise to the top".

"As the host country, China will automatically qualify to enter its national team in the tournament, gaining the opportunity to climb up FIFA ranks," Wanda added.

Wang built a $100 billion business empire founded on shopping malls, before setting his sights on building a global sports conglomerate.

A report in the Financial Times last week said the firm was in talks with European national leagues about the possibility of creating an international club competition that could potentially challenge the hugely popular UEFA Champions League. Wanda Sports Holdings already claims to be the world's largest sports company, and has a goal of reaching an annual turnover of $10 billion. Wanda became a top-tier sponsor of FIFA in March, the first company to join hands with the embattled body after the departure of scandal-hit president Sepp Blatter. Wanda holds a 20 percent stake in Spain's Atletico, this year's Champions League runners-up, and also owns the World Triathlon Corporation, which runs the Ironman series.
RELATED TOPICS