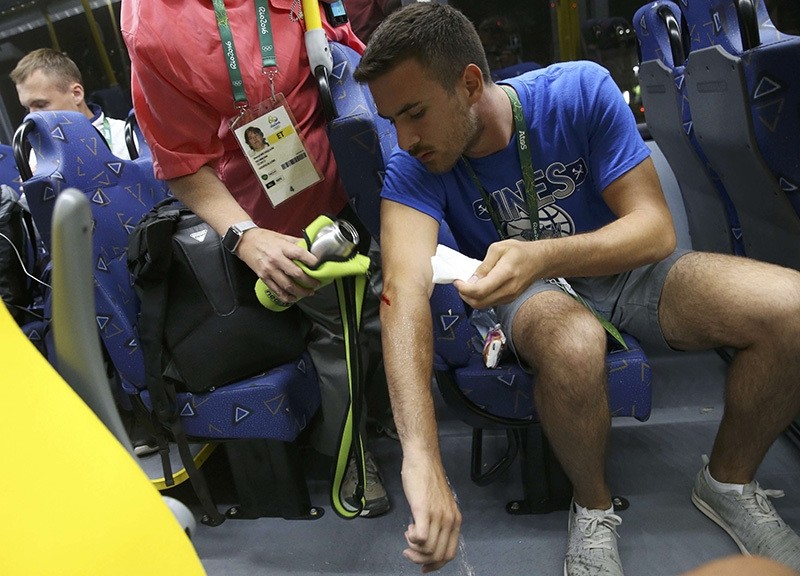 Technician Kaan Korkmaz has water poured on a lesion caused when a window of an official media bus shattered when driving accredited journalists to the Main Transport Mall from the Deodoro venue in Rio de Janeiro, August 9, 2016. (Reuters Photo)
by Compiled from Wire Services Aug 10, 2016 12:00 am

A bus carrying journalists at the Rio Games was hit by gunfire on a highway between Olympic venues on Tuesday, witnesses said. No one was seriously injured in the incident.

The bus was making its way from the Games basketball venue to the main Olympic park when, according to passengers, two shots were heard hitting the vehicle. Windows shattered and flying glass left two people with minor lacerations.

"We were shot at. I mean we could hear the report of the gun," said Sherryl "Lee" Michaelson, a retired U.S. air force captain who is working for a basketball publication in Rio.

Turkish daily Hürriyet reported that a Turkish volunteer for the Olympics named Kaan Korkmaz was also wounded in the incident.

A Belarus journalist suffered a cut hand in the incident, near Rio de Janeiro's notorious City of God favela, Gaston Sainz of the Argentinian daily La Nacion, who was on the bus, told AFP.

The incident came after a bullet hit a media center and landed near a New Zealand team official on Saturday.

A spokesman for the Rio organizing committee, Mario Andrada, said forensic investigators were trying to determine if the projectile was a bullet or a rock.

"We haven't yet been able to confirm what kind of projectile hit the bus," he said, adding that the incident occurred in the Curicaca neighborhood, just a few kilometers (miles) north of the Olympic Park. "We don't want to speculate."

"We threw ourselves to the floor and two kilometers later the police came and escorted us to the main press center with the broken windows," Sainz said.

"Two impacts on the right side of the bus shattered two windows. A reporter from Belarus suffered a cut hand. There is confusion as to whether it was bullets or stones," the reporter said.

A Reuters photograph taken in the first moments of the incident showed a small hole, about the width of a finger, in one of the windows.

Violent street crime in Rio has left its mark on South America's first Olympic Games. On Saturday, a bullet hit the equestrian center, missing journalists there by just a few feet. That bullet was suspected to have been fired by a gang member trying to shoot down a police blimp or drone, officials said.

On August 8, Turkish Women's National Basketball Team missed the pre-game training before the game against Australia in Group A when the shuttle driver could not find the way to the arena and the team drove around Rio streets for 1.5 hours.