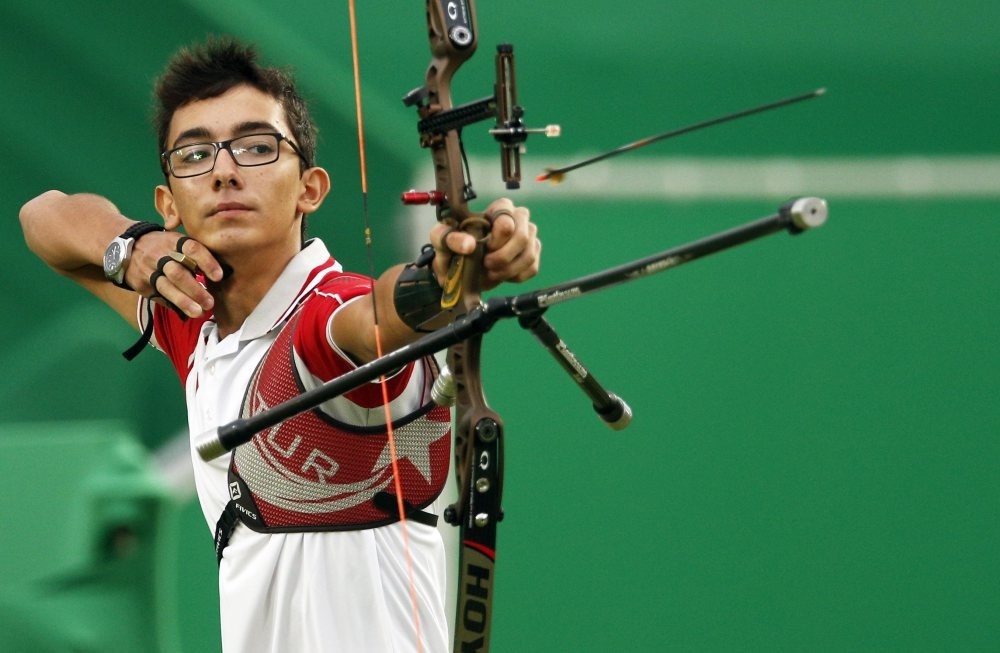 Mete Gazoz of Turkey takes aim during the menu2019s individual round 1/32 eliminations competition of the Rio 2016 Olympic Games Archery events.
by Daily Sabah with Wires Aug 10, 2016 12:00 am
Turkish archer Mete Gazoz was eliminated in the second round on Monday in Rio despite putting in an impressive performance that bodes well for the youngster's future.

Gazoz, who is one of two teenagers who are carrying Turkey's hopes for a medal in the Olympic archery, lost against Dutch rival Sjef van den Berg 7-3. The Turkish archer faced French rival Pierre Plihon in the first round and won 6-5. His good performance gave Turkey hope of a medal. Gazoz and Yasemin Ecem Anagöz, both 17 years old, competed for Turkey in the Olympics. Gazoz is a student in Istanbul and started archery just six years ago, making his international debut in 2013.

An upset stomach and a burst blood vessel in an eye were not enough to throw Dutch archer Sjef Van den Berg off target as he charged into the last 16 of the men's individual event. The world number five fell violently ill the day before the 72-arrow ranking round on Friday but recovered well enough to dispatch Tongan teenager Hans Arne Jensen and Mete Gazoz in his opening round matches. His next opponent in the last 16 will be decided on Tuesday. Archery superpower South Korea won gold in both the team events.
RELATED TOPICS