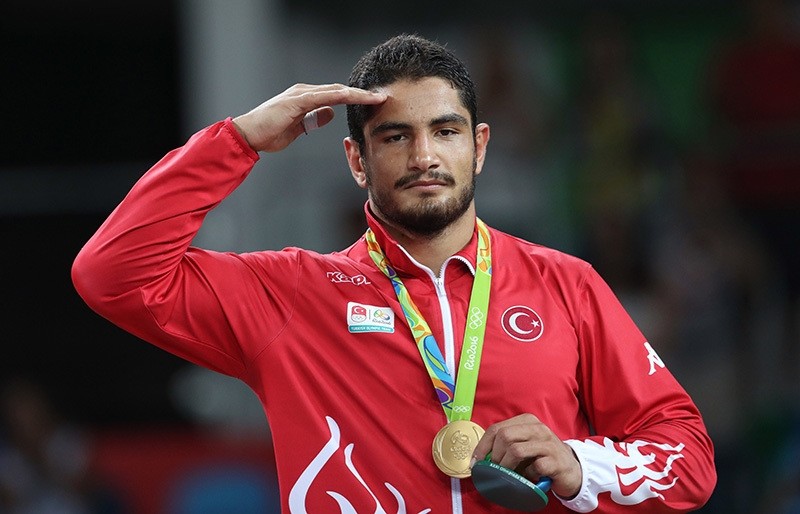 Turkey's sole gold medalist in Rio, wrestler Taha Akgül, has spoken of his pride in uniting the Olympic title with his world and European medals.

Akgül, 25, won the men's freestyle 125 kilogram event in the closing stages of the games by beating Iran's Komeil Ghasemi 3-1.

"I still cannot believe that I am now an Olympic, world and European champion," he told Anadolu Agency on Sunday. "I am very happy that I brought this medal home."

Akgül, who is from Sivas province in central Turkey, was among eight Turkish medalists in the summer games -- five in wrestling and others in taekwondo, weightlifting and athletics.

Speaking about the run-up to his final bout on Saturday, Akgül said: "Just before the finals, I had a splitting headache focusing on the gold medal. My country needed that success and it would cause extreme sadness if Turkey had left Rio without a gold medal."

Akgül, a physical education and sports student at Karamanoğlu Mehmet Bey University, is the son of a wrestler and said he had always wanted to follow in his father's footsteps. However, his mother had pushed him to get an education.

"Mum has had a key role in me managing both education and wrestling... Now, thanks to God, I made both mum and dad happy," he said.

Akgül, who has won three European titles and a world title in the last four years, said he hoped for more golds in Japan in 2020. "We are a great country and Turkey should be in the top 10 of the medal count," he said.

He dedicated his medal to the victims of Saturday night's terror attack in Gaziantep. "The army, the police and us here are all in the same duty -- serving our nation," Akgül added.