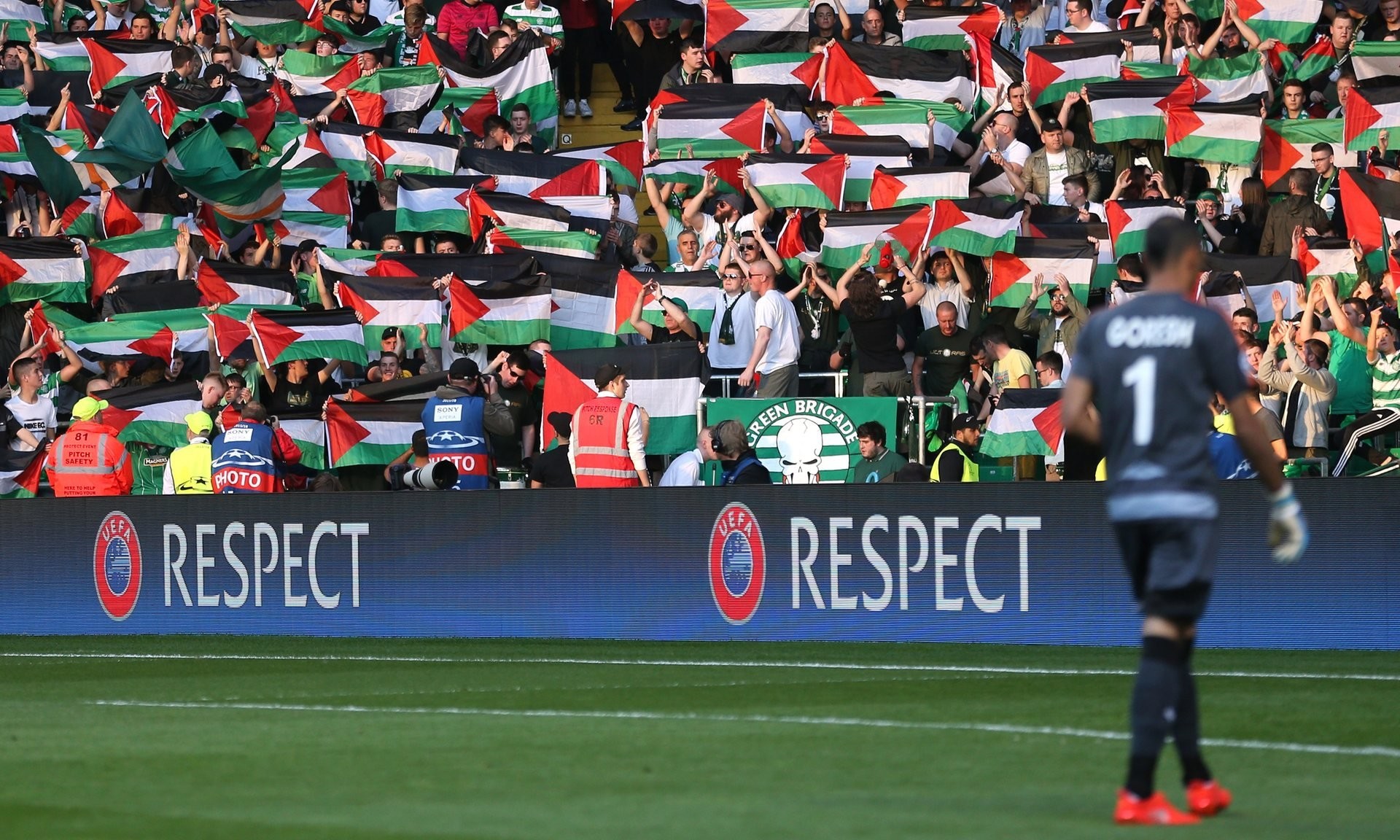 Thousands of Celtic fans have shown their support with the people of Palestine by flying flags inside the ground and protesting outside the stadium during a football match against an Israeli team last Wednesday. The defiant gesture came despite warnings from the Scottish police, and the possibility of sanctions from European football's governing body.

The show of 'solidarity' was arranged for the visit of Israeli champions Hapoel Be-er Sheva, who were playing Celtic in the opening leg of their UEFA Champions League play-off.

Celtic was subsequently charged by Uefa as a result of the display, citing a rule that forbids the use of "gestures, words, objects or any other means to transmit any message that is not fit for a sports event, particularly messages that are of a political, ideological, religious, offensive or provocative nature."

However, the Green Brigade has set up an appeal on the gofundme website to match the expected fine, with donations destined for Palestinian charities. By Tuesday it had raised more than £90,000.

"We took a stand last night because we had to. This was an Israeli team, one whose town is built on occupied Palestinian land," Martin Milligan, one of the supporters involved said after the game. "They were allowed to travel here freely for the game. Israeli football clubs can go anywhere they want, from Israel to any country in the world. That freedom of movement is not shared with Palestinian teams and players, who have restrictions imposed on them. There have been numerous incidents in recent years where that has happened."

Before the start of the Champions League cup qualifier, activists from the group Palestine Alliance handed out flags and leaflets with information about the Nakba, or Catastrophe - the 1948 war that led to the creation of Israel and rendered millions of Palestinians refugees stateless.

"When someone is representing Israeli state institutions it is sadly never merely a game; football, UEFA, and Celtic FC are being used to whitewash Israel's true nature and give this rogue state an air of normality and acceptance it should not and cannot enjoy until its impunity ends and it is answerable to international law and faces sanctions for the countless UN resolutions it had breached," the leaflets read.

Lee Griffiths from Wales chimed in on the debate saying, "I'm a Rangers fan but why do UEFA ban the Palestinian flag? I see flags of lots of countries flying in European stadiums. If Celtic fans wish to fly the flag then let them. Whatever happened to freedom of speech and expression?"

UEFA forbids displays of political statements at football matches but Alan Wilson, another supporter of the protest, emailed, "The Palestinian flag is recognized by the nations of the world except Israel. Why not fly it?"

Wednesday's match is not the first time that Celtic has run into controversy over Palestinian flags. In 2014, UEFA fined the club more than $18,000 for waving Palestinian flags during a match against Iceland's KR Reykjavik. UEFA said at the time the fine was imposed because the flags violated their rule that prohibits political expression.

Celtic won Monday's match 5-2 and now appear likely to qualify for the lucrative group stages of the UEFA Champions League, in which Europe's top clubs compete for the game's most sought after trophy.