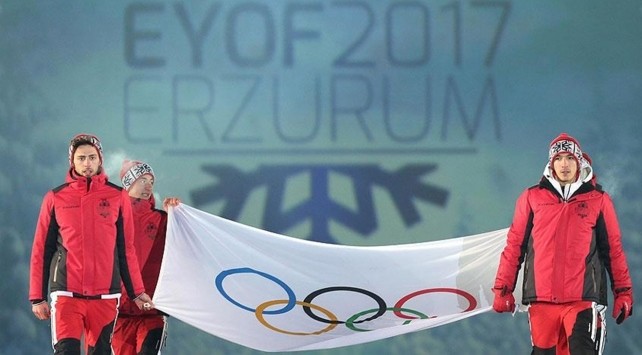 The European Youth Olympic Festival (EYOF) opened in eastern Turkey on Tuesday. On the first day of races, Turkish athletes managed to score one medal, while the Russians reigning in two categories

The European Youth Olympic Festival began in the eastern Erzurum province on Monday with the participation of approximately 675 athletes from 34 countries. This is the first time Turkey hosts the games for the festival, which is also known as the EYOF 2017. The opening ceremony of the games was held on Sunday night in Erzurum's 25,000-capacity Kazım Karabekir Stadium. Despite the minus 14 degrees Celsius (6.8 degrees Fahrenheit) temperature, many people showed up to the event.

The morning races began with skiing and biathlon competitions while other competitions during the day featured ice hockey and figure skating. Speaking at the opening ceremony, Youth and Sports Minister Akif Çağatay Kılıç said, "The young people who come from different countries around the world and stand shoulder-to-shoulder together like a rainbow make us hopeful." "As common hopes, joys and excitement increase, people will understand each other better and terrorism, which is trying to overcome people, will be weakened," Kılıç added.

Turkish athlete Ayşe Durlu did the honors of lighting the Olympiad torch on Sunday night. At least 190 dancers and some whirling dervishes also performed at the event.

According to the festival's official website, "The EYOF is the first top European multi-sport event aimed for young athletes aged 14-18." Winter and summer editions take place in two-year cycles and during odd-numbered years.

Aydan Karakulak was the first Turkish athlete to win a medal for the country when she secured third place in the girls' giant slalom final with 54 points. Russia's Elena Boltaeva was the winner while her compatriot Anastasia Kurochkina took home a silver medal. In the boys' category, Emre Boydak of Turkey placed fourth while Dmitry Loginov, another Russian, scored 90 points to win the gold. In boys' cross-country, Finnish athlete Miska Poikkimaki won the gold, while his compatriot Petteri Koivisto secured a bronze medal. Russia's Andrei Nekrasov collected the silver, while Turkish skiers could only secure spots below 20th place.

In the girls' cross-country race, Slovenia's Anja Mandeljc won the contest by finishing the race in 13 minutes, 49 seconds. Russians also dominated figure skating for girls. Alina Zagitova won the competition, while Ukraine's Anastasia Gozhva secured the silver and Estonia's Kristina Gromova the bronze.EYOF 2017 had initially been planned for Sarajevo and east Sarajevo, Bosnia and Herzegovina, whereas the 2019 event had been planned for Erzurum. In November 2015, the two cities agreed to swap their events because Sarajevo could not be ready in time, while Erzurum already had facilities in place from the 2011 Winter Universiade.
Last Update: Feb 14, 2017 1:00 am
RELATED TOPICS