Shame and glory for Turkey in youth Olympics 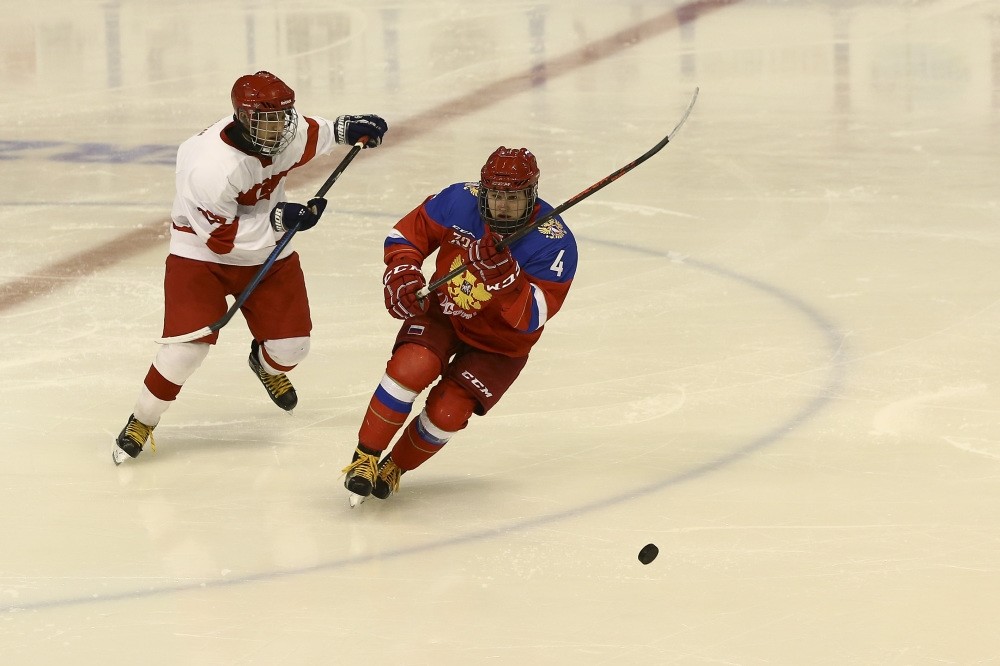 Nikolai Burenov of Russia tackles Turkish rival Emre Turan in boysu2019 ice hockey event.
by Daily Sabah Feb 15, 2017 12:00 am
Though not a household name across the globe in winter sports, Turkey is trying its best in an international winter sports event at the European Youth Olympic Festival 2017 held in Erzurum. While the country's athletes got away with scoring little in the skiing and other branches, its ice hockey team found itself burdened with embarrassment on Monday after a stunning 42-0 defeat to Russia. With a small ice hockey league and little interest in the sport, it was expected that the country would be defeated by the dominant Russians. But to compensate for the loss and to the surprise of everyone, Turkey dealt an unprecedented blow in the category of curling, against Norway no less as both the girls' and boys' teams took out Norway in matches on Monday and Tuesday.

The first period ended in a 15-0 lead for Russia as a sign of what was yet to come in the two remaining periods, which ended 27-0 and 42-0, respectively. Despite the poor score, the audience supported the home team until the end of the match. The junior ice hockey team received their fair share of criticism on social media by many who are frustrated with the tumultuous relations between the two countries, with the score and hashtag #buzhokeyi (ice hockey) becoming a national trending topic on Twitter.

Ice hockey is a relatively new sport for Turks, however, overall interest is on the rise. The Turkish Ice Hockey Federation was established in 1991 and became a member of the International Ice Hockey Federation (IIHF) the same year. Since 1993, a national ice hockey league has been organized, with the number of participating teams steadily rising. As an unfortunate coincidence in the wake of the match, the Turkish national ice hockey team currently ranks 42nd out of 50 national teams in worldwide standings.Thankfully for Turkish youngsters, the women's international ice hockey match between Slovakia and Bulgaria in 2008 that ended 82-0 remains the biggest blowout in ice hockey. For the curling, it was another story. The girls' team defeated Norway 11-9 in extra time while the boys' team lost 8-3 to Russia in a Monday night game. The girls' team narrowly escaped a defeat as they wrapped up the game with a draw before the addition of extra time.

It was Poland's turn, however, yesterday for victory in curling as Poles upset the Turkish girls' team in a 7-6 victory, with a stunning comeback from 6-1. Tuesday, it was also the boys' turn to defeat Norway in curling. After the humiliating defeat to the Russians on Monday, the boys' curling team scored six against Norway's four.
RELATED TOPICS