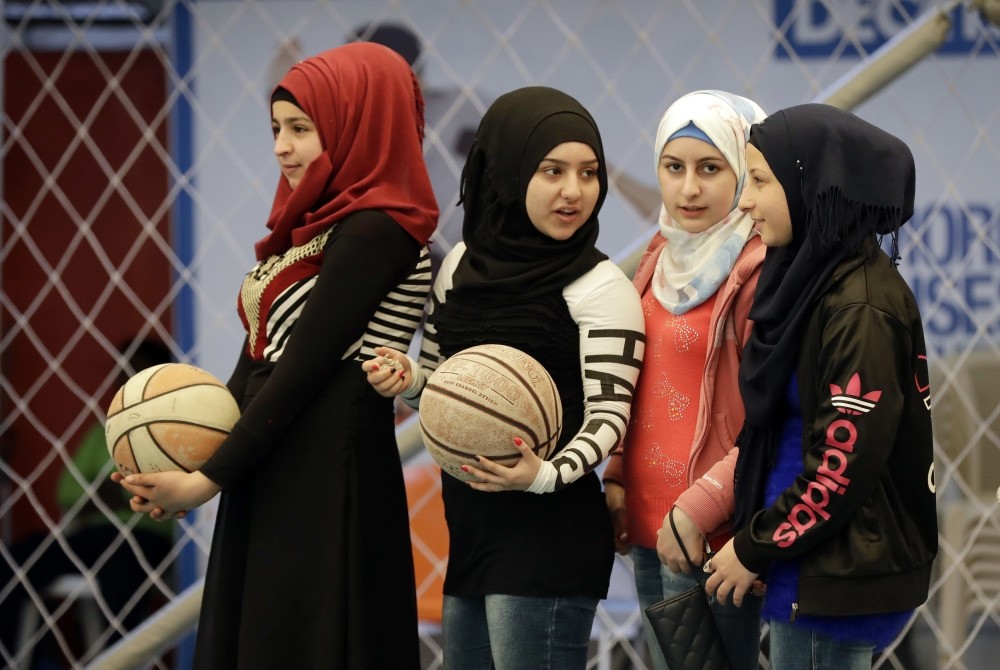 The Sport 4 Development program, run by the U.N. children's agency, aims to bring 12,000 children, mostly Syrian refugees, to blacktops and turf pitches this year to teach the basics of soccer and basketball, and to ease the pain of war and displacement

Every Sunday, the gymnasium along Beirut's airport highway echoes with the shouting and laughter of dozens of Syrian children enjoying a rare escape from a grim and confined life in exile. The Sport 4 Development program, run by the U.N. children's agency, aims to bring 12,000 children, mostly Syrian refugees, to blacktops and turf pitches this year to teach the basics of soccer and basketball, and to ease the pain of war and displacement.

"We try to get them out of their stressful environments and the frights that they've lived through," said Maher Nakib, 40, the technical director of Hoops Lebanon, the sports association behind the project.

Of the one million Syrian refugees the U.N. says are living in Lebanon, more than half are under 18 years old. Syrians here face legal and other forms of discrimination, and many parents are hesitant to let their children play outside in the crowded alleys of Beirut's poorer neighborhoods, where most of the refugees live. The monthlong Hoops program provides a safe environment where the children can blow off steam, as well as learn self-confidence and teamwork.

"They come back home and they're too tired to fight," smiles Fatima Tayjan, a refugee from the Syrian city of Aleppo who has enrolled three of her four children in the program. When her family of six returns home to their crowded two-bedroom apartment, the children have "released all their energy and they are ready to talk to each other," she said.

Maram al-Malwa, a 17-year-old paid volunteer who came up in the program, recalls her own feelings of isolation when she and her family fled from Aleppo to Lebanon five years ago. "It was a new country, even a new accent," she said.

But now she is irrepressible, rising on the balls of her feet when she speaks and helping coaches reach through to children in the group activities. She is one of a handful of the children pulled aside for a six-month mentorship on leadership and coaching.

"You grow, you experience victories, setbacks, you learn to fight for yourself, and you become more confident," she said.

As the U.N. and aid groups have struggled to assist the nearly 5 million Syrian refugees scattered across the region, the focus has been on schooling, aid and shelter, with few resources left over for cultural or recreational activities.

"Children won't necessarily express themselves unless you give them an outlet, and sports are an excellent medium to do so," said Nakib, the technical director.

Rania Qadri, who fled from Syria's southern Daraa province, said she saw her oldest daughter change before her eyes."She used to be introverted, she wouldn't speak to anyone," she said. "Now she comes home and tells me, 'I've made friends, we've been playing soccer, we've been playing games and sports.'"
RELATED TOPICS