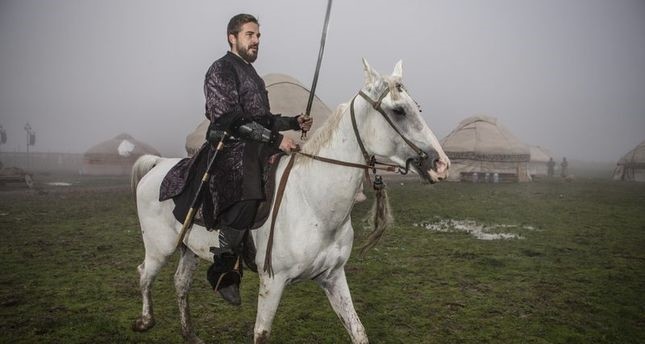 ‘Diriliş Ertuğrul,' a popular TV series on the life of Ertuğrul, father of Osman I, the leader of the Ottoman Turks, has boosted interest in traditional Turkish sports such as riding, archery and cirit (also known as jeered), according to Turkey Traditional Sports Federation President Hakan Kazancı

Since its premier on the state-run Turkish TV channel TRT 1 in 2014, "Diriliş: Ertuğrul" (The Revival: Ertuğrul) has captured the attention of television audiences across the country, including President Recep Tayyip Erdoğan.

The show is based on the history of the Oghuz Turks in the 13th century. It centers around the life of Ertuğrul, the father of Osman I, the leader of Ottoman Turks and later, the founder and namesake of the dynasty that established and ruled the Ottoman Empire.

In addition to gaining widespread popularity, the show has created a renewed interest in traditional Turkish sports or Ethnosports. President of Turkey Traditional Sports Federation Hakan Kazancı, in an interview with Anadolu Agency (AA), said their primary goal is to preserve Turkish traditions and culture through cooperation with Diriliş Ertuğrul's production team.

"Viewers of all ages want to ride horses, shoot arrows and play cirit. We are making every effort to provide them the opportunities to do so. Different municipalities have started to build facilities thanks to the TV show's popularity."

Kazancı, stressing the importance of wearing traditional clothes while doing these sports said, "We realized that we don't follow a dress code and so, we got help from our friends who designed costumes for Diriliş Ertuğrul. Now, we have designed special sportswear for both men and women. However, we do not have enough horses. So, we are currently negotiating with the Ministry of Food, Agriculture and Livestock. In short, we are now going through the planting season and we hope to reap the benefits soon."

The Federation's president said that they have plans to establish dedicated horse-breeding regions.

"There is a city in France known for horse breeding operations. We have also formed a consortium with the Riding Federation and Turkey's Jockey Club. We aim to build a facility similar to the one in France. We, the three presidents, will study the region in France and take actions for space allocation, as soon as possible. We would prefer it to be in Istanbul. Facilities may be established in Şile or Riva, east of Istanbul. We consider that such a facility will provide a good incentive to traditional sports," he said. Kazancı added that they have requested help from the sponsors of the World Ethnosports Confederation, which is presided over by Bilal Erdoğan, son of President Recep Tayyip Erdoğan.

"We have received promises from sponsors of the confederation, namely, AA, Turkish Airlines (THY), Spor Toto, ES Medya and Turkcell. We are hopeful that we will achieve our goals, thanks to these sponsorships," he said.

"We are a sister organization of the Ethnosports Confederation. Our clubs and athletes will compete in events held by the association in May. This will be our biggest cooperation so far. We are planning and working together. Our goal is to share traditional sports with the next generation," said Kazancı.He also heralded the World Nomad Games, which was previously held in Kyrgyzstan and will be held in Turkey soon, saying: "This way we will be able to reach bigger audiences. As a federation, we concentrated on 10 provinces. However, with the new administration, we have assigned 81 representatives for Turkey's all 81 provinces."
Last Update: Mar 08, 2017 1:58 pm
RELATED TOPICS