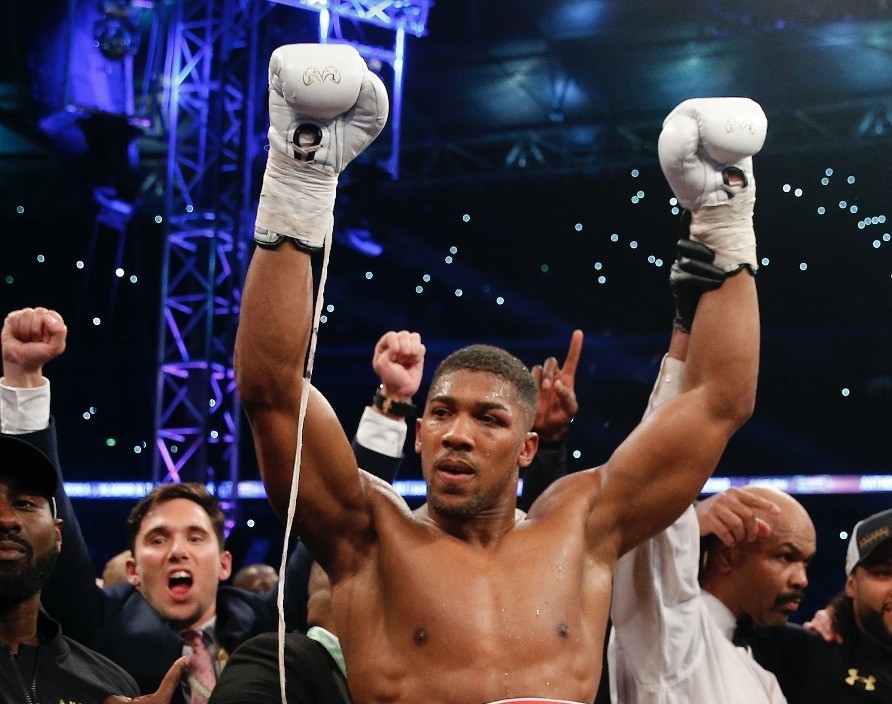 Anthony Joshua celebrates after winning the world heavyweight title.
by May 01, 2017 12:00 am
Anthony Joshua was hailed as "the biggest star in British sport and the biggest star in world boxing" after his exhilarating world heavyweight title triumph over Wladimir Klitschko on Saturday sky-rocketed him into the global sporting elite. After the Briton's 11th round stoppage of Ukraine's rejuvenated former champion at Wembley Stadium in a heavyweight title fight for the ages, Joshua's handlers outlined ambitious plans to turn him into a global phenomenon. Promoter Eddie Hearn envisages the charismatic, 27-year-old, who unified the IBF and WBA titles in front of a record-equalling 90,000 crowd, emulating his idol, Muhammad Ali, by taking his special talent around the world.

Just as Ali won the 'Rumble in the Jungle' with George Foreman in Zaire and the 'Thrilla in Manila' against Joe Frazier, Hearn has plans for Joshua to light up new venues in China, the Middle East and Africa.

"The way he won confirmed it to me," added the promoter, after revealing that the British pay-per-view take up for the fight had been more than the record 1.15 million for the Manny Pacquaio-Floyd Mayweather 2015 'fight of the century'.

Joshua, the 2012 Olympic super-heavyweight champion, again made for scintillating TV, having to show considerable heart to go with his concussive power to recover from a sixth round knock-down -- the first of his unbeaten professional career. He got up, took time to recover his senses and find a second wind before twice knocking down Klitschko in the 11th round before the referee came to the stricken Ukrainian's rescue. It was Joshua's 19th straight win inside the distance.

"Yet there's so much more improvement to come. By unifying the title, I think we completed phase two of the four phases in AJ's career," said Hearn. Phase three, he said, would be the big-money defences around the globe. "The plan, rather than just keep going in the U.K. is to explore and break new markets and boundaries," explained Hearn.

When asked about his new place in the global sporting pantheon, he just shrugged: "I'll let you guys enjoy it. How do I feel at the minute? Like I did before I won this fight.