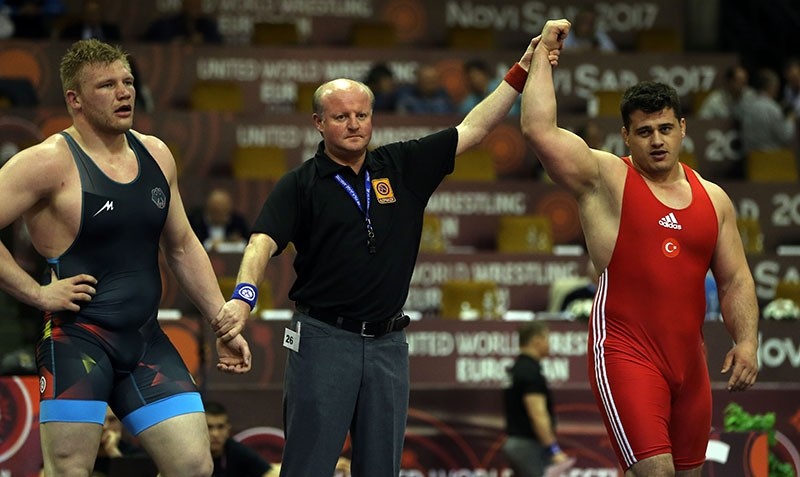 Turkish wrestling enjoyed one of its proudest moments this weekend when Turkish wrestler Rıza Kayaalp won a gold medal, the seventh of his career, at the 2017 European Wrestling Championships in Serbia on Saturday.

Kayaalp, a 27-year-old athlete from central Yozgat province, came first in the men's 130-kilogram (286 pounds) Greco-Roman category by beating Hungary's Balint Lam. He won a silver medal at the Rio Games in 2016.

Kayaalp said: "I ran out of my skin and won in the final one more time. I advanced to eight consecutive finals in the European championships. This is a historic victory for me. Next is the world championship. I hope I will continue my winning run."

Answering a question on whether he was anxious after falling behind 3-0 against his rival during the final match, Kayaalp said: "After I gave away two points I stumbled a little. I had pains in my arms and legs. Besides, I was not in a great shape. I came here after a serious injury. I had a very difficult preparation period. However, I managed to come back after a 3-0 defeat and won in the end. I have kept up my winning run. It must be an example for our junior wrestlers. We must never give up and always win.

"I made a good start ahead of the 2020 Tokyo Olympics. I had gotten four titles between the London and Rio Olympics. This time, I am aiming for four European Championships and three world titles."

President Recep Tayyip Erdoğan congratulated Kayaalp.  His family in Yozgat was also understandably happy. Kayaalp's mother Sevgi Kayaalp said: "I prayed a lot for my son to win the tournament. I was very excited; it was as if I were the one wrestling. I was very anxious after my son fell behind 3-0 against his rival. I would have been very sorry if he had lost. But he won and I'm very happy."

Rıza Kayaalp was not the only source of pride for Turkey. Fellow Turkish wrestler Taha Akgül won the gold medal at the 2017 European Wrestling Championships in Serbia on Friday. Akgül, 25, an athlete from central Turkey's Sivas province, came first in the men's 125-kilogram (276 pounds) freestyle category by beating Azerbaijan's Jamaladdin Magomedov 8-2. The national athlete had participated in the event despite a foot injury. This was his fifth European championship win of his career. The tournament has three categories: women's and men's freestyle, and Greco-Roman.

Turkish athlete Yasemin Adar won the gold medal in the women's 75-kilogram freestyle category in the same tournament on Thursday.

Akgül was Turkey's sole gold medalist at the Rio Games in 2016, where he won the gold medal in the 125-kilogram (276 pounds) freestyle category.