High school first in US to provide hijabs for Muslim athletes 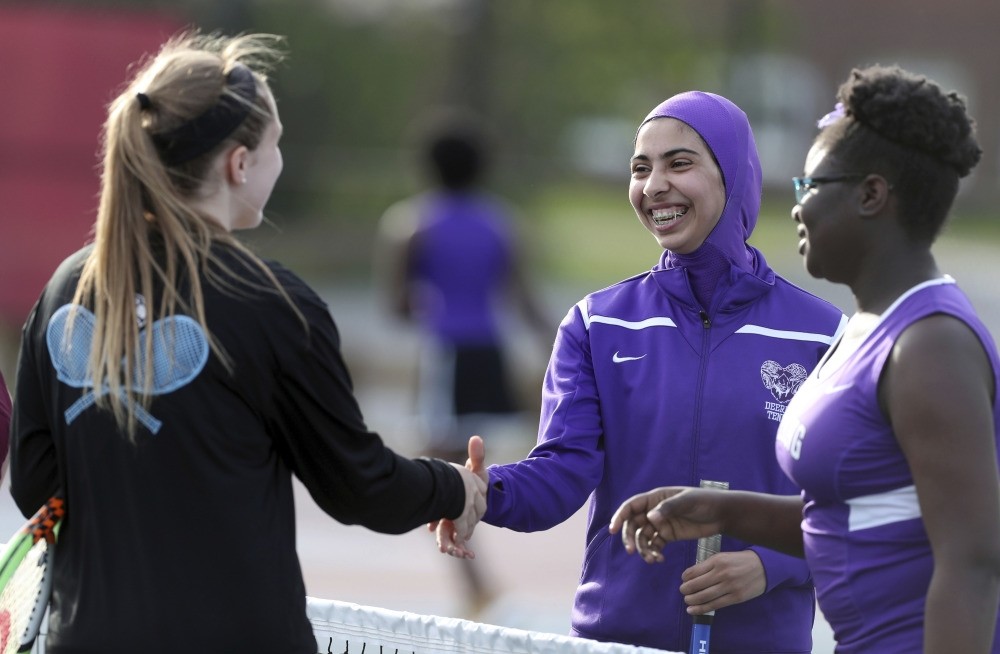 Tabarek Kadhim (C) congratulates an opponent after a tennis match in Windham, Maine.
by Associated Press Jun 09, 2017 12:00 am

Deering High School in Portland, Maine, is providing sport hijabs with the goal of making Muslim girls comfortable -and boosting their participation in sports. The lightweight scarves stay put and are less bulky than other hijabs, garments that cover the hair and are worn by many Muslim women to express their faith. "We're more confident on the field," said junior lacrosse player Fadumo Adan.

"This one doesn't fall off. No matter what I do, it won't fall off." Tennis co-captains Liva Pierce and Anaise Manikunda raised more than $800 online to buy the sporty hijabs for their Muslim teammates after the school's athletic director learned of the product. They solicited private donations to avoid criticism for using taxpayer funds on religious apparel, and ended up with enough to outfit all teams, including lacrosse, soccer, volleyball, softball, field hockey and track. The high school is believed to be the first in the United States to provide hijabs for Muslim athletes, as opposed to students providing their own headscarves, said Ibrahim Hooper, spokesman for the Council on American-Islamic Relations.

The move is part of a trend around the world of more Muslim women finding ways to play sports while wearing hijabs. The International Basketball Federation and the international soccer organization FIFA lifted bans on head coverings in recent years, and Ibtihaj Muhammad became the first American to compete at the Olympics while wearing a hijab when she won a bronze medal in fencing at the 2016 Rio Games. Muslim students at Deering said they were grateful for the support at a time when Republican President Donald Trump has pushed to ban travel from several Muslim countries.