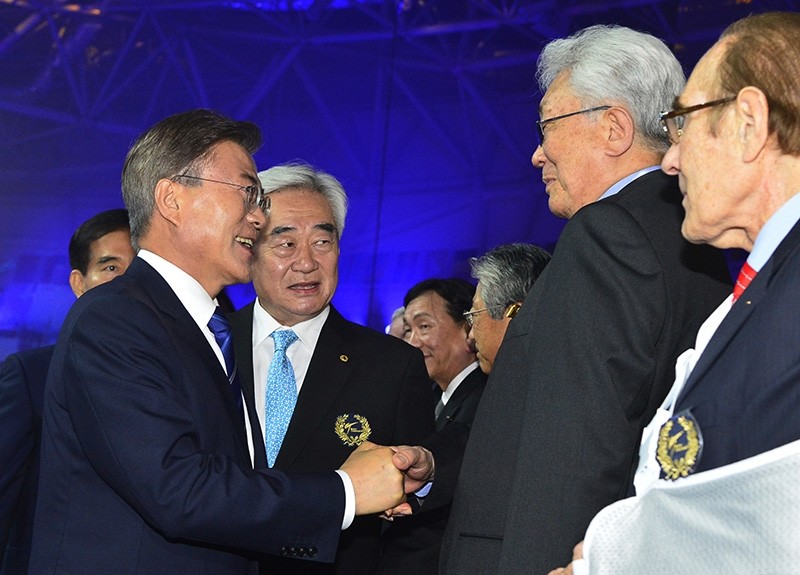 Moon made the comments during the opening ceremony of the World Taekwondo Championships in the South Korean town of Muju, where a North Korean delegation led by International Olympic Committee member Chang Ung was also present.

The championships, which will feature a performance by the North Korean taekwondo demonstration team, mark the first sports exchange between the Koreas since the liberal Moon took office in May.

Moon has expressed a desire to use the Feb. 9-25 Pyeongchang Olympics to reach out to North Korea, with relations between the two at their lowest point in decades. During his stay in the South, Chang is expected to meet South Korean officials to discuss cooperation at the Winter Olympics.

"If North Korean athletes participate in the Pyeongchang Olympics, I think it would greatly contribute in realizing Olympic values, which are about bringing humanity together and promoting world peace," said Moon.

He recalled key moments in sports diplomacy between the Koreas, including when they sent unified teams to the world table tennis and youth soccer championships in 1991, and their athletes marching together during the opening and closing ceremonies of the 2000 Sydney Olympics.

Participation in Pyeongchang could "provide a turning point for the reconciliation between the South and North," Moon said. "I sincerely ask the IOC and (IOC member) Chang who are here with us today for their strong consideration and cooperation."