Slippery wrestlers gear up for top tourist attraction at Kırkpınar 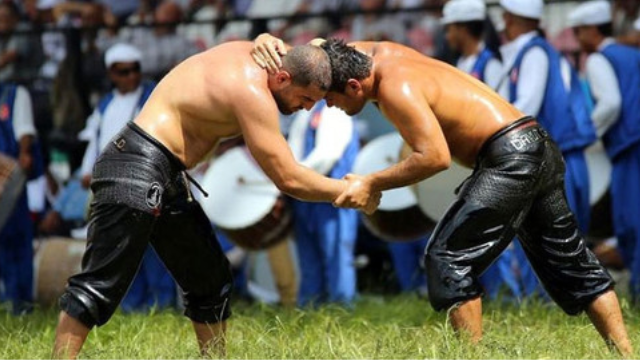 Starting on Friday, wrestling fans and tourists will stream to Edirne in the northwest to see muscular men covered in olive oil as they try to put each other on the ground in Kırkpınar, one of the oldest wrestling events in the world

The 656th edition of the Kırkpınar annual wrestling contest is set to start on Friday in Edirne, a border province in northwestern Turkey. One of the oldest continuous wrestling events in the world, Kırkpınar, a popular tourist attraction, will offer a chance to the audience to see heavy-set half-naked wrestlers donning leather pants trying to put each other's backs on the ground. It might be an ordinary spectacle for wrestling pundits but they will try to do this while covered in olive oil.

Workers yesterday put the final touches on Er Meydanı (roughly translated as Field of Men or Field of Soldiers), the grass-covered area where hundreds of wrestlers of all sizes will take each other on while a parade was held across the city, which was once the capital of the Ottoman Empire. Teen wrestlers will be the first to challenge their rivals but the main event will be for the title of "head wrestler" in Sunday's final match.

Throughout Turkey, oil wrestling championships are held in different regions. The winning wrestlers of these championships attend the Kırkpınar Oil Wrestling Festival to win the title of wrestling champion. The champion keeps the title for an entire year and if he manages to retain his title for three years in a row, he wins an actual golden belt.

Oil, provided by an association of local olive oil producers, is the most challenging part of the wrestling. Some two tons of olive oil will be given to the wrestlers, who are obliged to cover their upper bodies themselves in an ancient ritual. Oil trickling down to the kıspet, the leather pants they traditionally don, makes it more difficult for their rivals to get a good grip, leading to contests that sometimes take about an hour, though most matches end in mere minutes.

Kırkpınar traces its history to the 14th century and legend has it that 40 soldiers deployed for conquest of the modern-day Trakya region where Edirne is located, often engaged in oil wrestling for training and a pastime activity. Two brothers among the soldiers were so fixated on defeating each other, they wrestled for hours and died on the spot, the legend says. Their burial site is where the present-day contest is held. During the reign of Ottoman Sultan Murat I, a wrestling school was established in Edirne and since then, an annual wrestling event was held in the city. It was scrapped during the last days of the Ottoman Empire but was introduced again as a regular event in the early years of the Republic of Turkey.