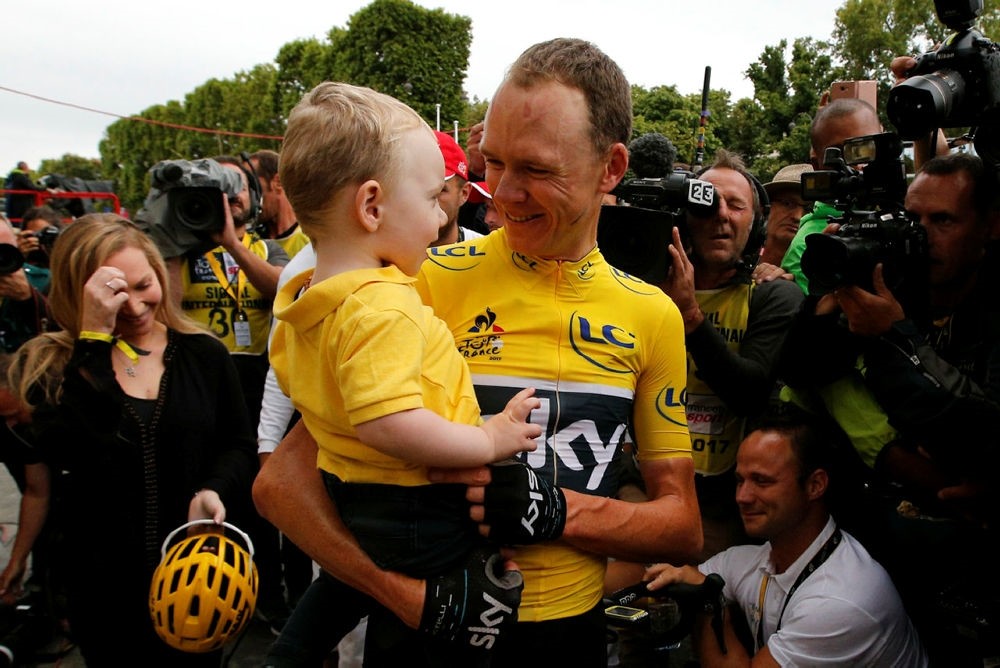 The 32-year-old Kenyan-born British rider finished 54 seconds ahead of Colombian Rigoberto Uran overall, the smallest margin of his wins.

This was the third straight win for the Team Sky rider. His first in 2013 came the year after former teammate Bradley Wiggins sparked off an era of British dominance.

As per tradition, the 21st stage was reserved for sprinters and mostly a procession for Froome and the other overall leaders.

Moments later, Froome and the rest of the peloton crossed the line after eight laps of an eye-catching circuit around the city's landmarks, finishing as usual on the famed Champs-Elysees.

Froome sealed his win on Saturday, finishing third in the time trial in Marseille where he put more time into Uran and Bardet, who dropped from second to third.

After more than three weeks of stressful racing, it was a relaxed and easygoing atmosphere as riders set out from Montgeron in the Essone suburb south of Paris to the evening finish 103 kilometers (64 miles) away.

Froome chatted casually with two-time champion Alberto Contador, the Spanish veteran, as if they were on a sight-seeding ride.

Matthews became the third Australian to win the green jersey, all this decade, following Robbie McEwen and Baden Cooke.

Froome's teammates wore a yellow stripe on the back of their Team Sky shirts. They allowed themselves a flute of champagne, chinking glasses with leader Froome, as they casually rolled through the streets under cloudy skies beside cheering fans packing the roads into Paris.

Everyone was in high spirits, happy to be make it through a grueling race that saw Australian Richie Porte, one of the pre-race favorites, and Froome's teammate Geraint Thomas both crash out. Britain's Mark Cavendish, a 30-time Tour stage winner, and Marcel Kittel — winner of five stages this year — pulled out injured after crashes.

As the slow-moving peloton passed near where Frenchman Yoann Offredo grew up, a television camera moved alongside, asking what it was like to be riding so close to home.

"I might nip to the bathroom," he said, jokingly.

Another rider, Cyril Gautier, asked his girlfriend Caroline to marry him: the proposal scrawled on a piece of paper held up by the smiling Frenchman as he blew a kiss to the camera.

Barring a crash, Froome was virtually assured of winning.

The route to another victory continued to unfurl before him without mishap — although he did have to change bikes at one stage. Barguil had a brief hiccup, needing to catch up after a puncture, but generally the peloton took in the sights.

Riders passed the Hotel des Invalides — a magnificent, sprawling set of buildings ordered by King Louis XIV in the 17th century — and actually rode through the resplendent Grand Palais exhibition hall, then past the golden statute of Joan of Arc, up the famed Champs-Elysees from the iconic Place de la Concorde and its towering 23-meter Egyptian obelix, and around the Arc de Triomphe.

Some might say Froome did not shine too brightly because he didn't win a stage, but neither did American Greg Lemond when clinching his third and final Tour in 1990.

For Froome, consistency and a dogged ability to respond when put under pressure were the keys to his latest success.