Chess legend Kasparov returns to board 12 years after retirement 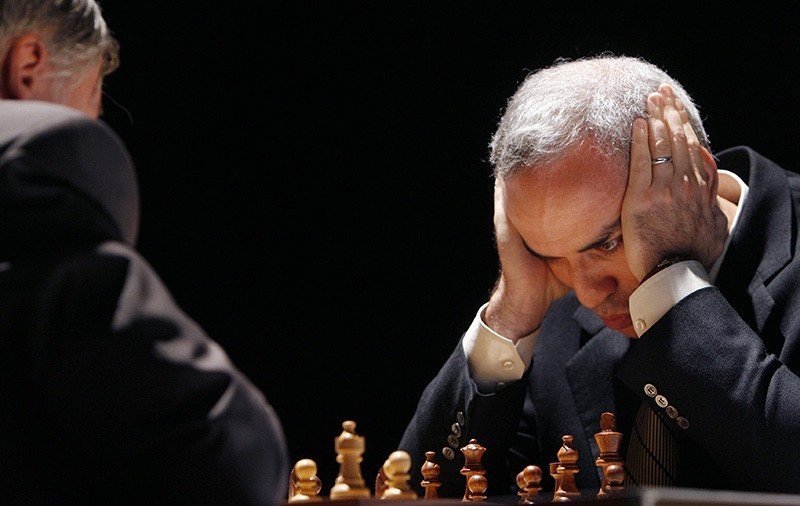 In a move electrifying the world of chess, former world champion Garry Kasparov is coming out of a 12-year retirement Monday to take on a new generation of players who have long worshiped him as the closest thing to a "chess god."

Kasparov utterly dominated the sport from 1985 to 2000. Since his withdrawal from a tournament in Linares, Spain in March 2005, the Russian's absence has left many chess fanatics feeling orphaned.

So there was considerable surprise when he agreed to play in the new Rapid and Blitz tournament though a wild card in St. Louis, Missouri, which follows closely after the annual Sinquefield Cup competition, a major stop on the world tour, in the same city on the Mississippi River.

Kasparov, who became the youngest world champion ever at age 22 in 1985, is now 54, more than a decade past the age when professional chess players typically retire. He will be the oldest among the field of 10 players when play starts Monday.

"Ready to see if I remember how to move the pieces! Will I be able to announce my re-retirement afterward if not?!," Kasparov tweeted last month when it was announced that he was coming out of retirement.

From Monday to Saturday, the Russian will put aside the business that has kept him busy in retirement -- his vocal and determined opposition to President Vladimir Putin -- to play against some of chess's big guns, like fellow Russian Sergey Karjakin.

The world's current No. 1 player, Magnus Carlsen of Norway, will not be there, however.

Still, the return to competition of the Azerbaijan-born Kasparov -- a man once dubbed the "Beast of Baku," whose epic clashes with Anatoli Karpov are part of chess legend -- has had an explosive impact in the chess world, particularly in St. Louis.

'To see this dude play'

"Everyone is talking about it," American chess grandmaster Alejandro Ramirez told AFP. "People are flying from India and China to see this dude play."

Kasparov's long and "unparalleled" dominance of the chess world made him "a cultural icon," said Ramirez, a US Open champion who coaches the chess team at Saint Louis University.

The younger generation, which Ramirez sees emerging almost by the day, "certainly looks up to him," he said. "His contribution to chess theory and our understanding of the game resonate still today."

But what are Kasparov's realistic chances after so many years away from the grueling competition of professional chess?

The man himself dodged the question in his only tweet mentioning his comeback: "Looks like I'm going to raise the average age of the field and lower the average rating!" he quipped, in a bit of self-deprecating humor.

The high-pressure, speed-chess format of the St. Louis tournament, where players are forced to make their moves far more rapidly than during normal competitions, could be tough on the graying Kasparov, as he takes on much younger players who specialize in that approach.

"I expect him to be fighting for the top spots, but I would be surprised if he wins it all," said Ramirez, 29, who became a grandmaster at age 15.

But in a tournament that will include four of the world's top 10 players, Kasparov is not expected to be a pushover, said Sylvain Ravot of France, who has a master rating.

"His sense of the game, his passion for winning, his experience and his reflexes should all help him do well, perhaps even land in the top three, even if it will be much harder for him," Ravot said in an interview, while emphasizing Kasparov's "incredible aura."

Accustomed to being a step ahead of the field, the Russian "chose the venue well -- more or less within his reach -- for his comeback," Ravot said, adding that the mere fact of Kasparov's return might be more important than his actual performance.

"It's a bit like Pete Sampras making a comeback" to tennis, he said.

Kasparov would appear to be motivated more by love of the game than anything else, though the winner's purse in St. Louis is a not-paltry $150,000.

"It's not even clear that he wants to play again after St. Louis," the French expert said.

Kasparov did in fact return to the game, though only in informal capacity, in 2015. He played a friendly match against Nigel Short -- 10 years after formally bowing out of professional competition.

Kasparov did not appear to have lost a step: He crushed his British opponent, 8 to 1.

Born Garik Weinstein in Azerbaijan to an Armenian mother and Jewish father, Kasparov has been described as "a monster with 100 eyes, who sees all."

At age 12, he took on his mother's surname and launched what became one of the longest and most grueling rivalries in the history of chess, against Soviet grandmaster Anatoli Karpov.

The icy, stone-faced Karpov was a symbol of the once mighty but then crumbling Soviet Union, while Kasparov was just a young pup from little Azerbaijan.

In 1985, Kasparov beat Karpov and, at just 22, became the youngest world champion ever, kicking off an era of unprecedented dominance.

Kasparov held that crown for 15 years and set about breaking molds in the world of chess.

He was a show unto himself -- a theatrical bundle of nerves who wanted to win at all costs, shunning draws in games and sometimes even speaking of himself in the third person. Other players feared him. His bigger-than-life style earned him critics, too.

He pioneered using computer databases as a tool for practicing -- a venture that would come back to sting him.

Kasparov had declared haughtily that no machine could ever beat him at chess.

He took on the IBM supercomputer Deep Blue, beating it in 1996 but then losing to the machine a year later. He and the computer were tied at five games each in a match in which the first to reach six won. When Kasparov lost, he cried foul.

Three years later, Kasparov lost his world title to his former student, Vladimir Kramnik, and retired from competitive chess in 2005.

Kasparov never managed to cut ties with the game, even attempting in 2014 to become president of the World Chess Federation by dethroning its wealthy and well-connected leader, Kirsan Ilyumzhinov.

But Kasparov's outspoken personality dogged his campaign and he lost after only securing 61 federation delegates votes out of 175. Ilyumzhinov, who was close to Russian President Vladimir Putin, prevailed.

The young chess retiree took to politics, becoming fixated on a bid to checkmate Putin.

After leaving the game in 2005, Kasparov founded the anti-Putin opposition movement Other Russia, accusing the president of returning the country to its dictatorial past.

He became a powerful political voice and even tried to win the Kremlin in the 2008 Russian presidential election.

Kasparov took part in unprecedented anti-Putin demonstrations in 2011 and was arrested in 2012 after a rally in favor of the punk rock feminist group Pussy Riot.

In 2013, he opted for life in exile, moving to New York to calculate his political moves at a distance.

Now, after 12 years of jousting with the Kremlin, Kasparov has found the allure of his first love too great to resist -- and his return to the board could grant him the chance to regain the crown.