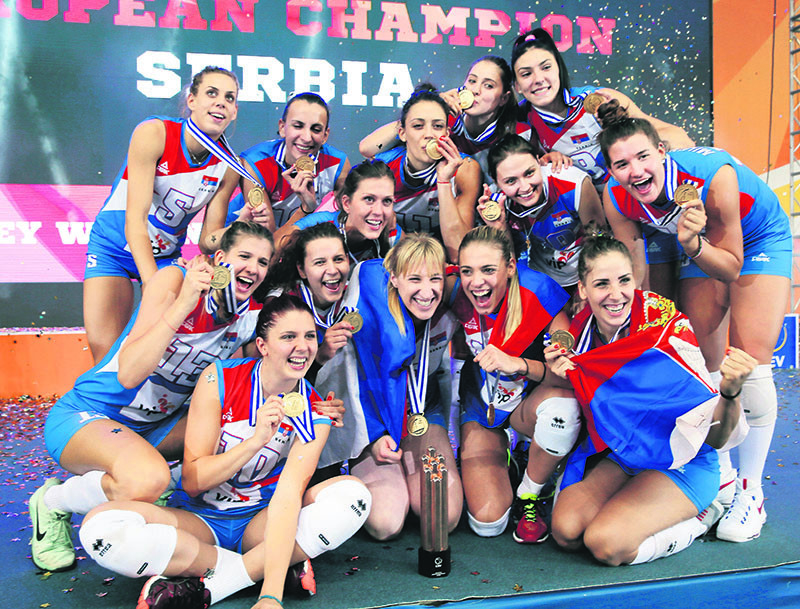 After Turkey beat co-host Azerbaijan in the third-place playoff, Serbia won Women's EuroVolley with a 3-1 victory over the Netherlands to claim their second European title ever

The 2017 women's EuroVolley, co-hosted by Azerbaijan and Georgia, came to an end on Sunday with Serbia taking home the title. Serbia beat the Netherlands 3-1 in the final to claim their second European Championship title, after standing on top of the podium in 2011.

With the title, Serbia have now won five European Championship medals in total, including two gold, one silver and two bronze. They lost the 2007 final to Italy and finished third in 1951 (as Yugoslavia) and 2015. Serbia's 20-year-old Tijana Boskovic was given the Most Valuable Player (MVP) award. Boskovic scored a team-high 130 points in the championship. She averaged 7.22 points per set, more than any other player in the competition. Losing finalists the Netherlands will rue the opportunity to grab their second European gold. They won the title back in 1995 and now have six medals in the competition, including a gold, four silver, and a bronze. The Netherlands have now lost the European Championship finals in three of the last five editions (2009, 2015 and 2017). Dutch players Lonneke Slöetjes (113) and Anne Buijs (110) finished third and fourth respectively on the 2017 European Championship top scorers' list.

After the final, Serbia's Boskovic said, "We are the European champions, this feeling is incredible! We played really well, like one, as a team from the beginning. We lost only two sets during the whole tournament. We worked five months for this and you can see the results."Another Serbian player and part of the 2017 women's EuroVolley dream team, Brankica Mihajlovic, said, "We are really pleased. I think this European Championship has been good for us. We lost only two sets. We played a very good team in the final who pushed us, especially in the third set, but fortunately, in the fourth, we found a way to finish it. I hope we can continue in this way because next year we have the World Championship."

Meanwhile Robin de Kruijf, the middle blocker of the Netherlands said, "I have mixed feelings, on one hand, I am sad but on the other, I am pretty calm because today I think Serbia deserved a win more than we did. We did not score the points when we had to and a team like Serbia will score the next ball they get. So, in the end, I am happy with a silver medal."

Another Dutch player and member of the dream team, Anne Buijs, said, "It is disappointing for us. For me personally, it is the third silver medal and I really felt like this one was going to be different. We were completely ready but had many problems stopping Boskovic and Mihajlovic and we have to accept that the opponent team were better today. I am proud that we have won silver with our new coach, but I am disappointed at the same time." Earlier in the day, Turkey beat co-hosts Azerbaijan 3-1 in the third-place playoff to claim their third European Championship medal. They won a silver medal in 2003 and a bronze in 2011. Turkey's Neriman Özsoy (101) was one of only six players to reach the 100-point mark at the 2017 European Championship.

Azerbaijan, on the other hand, equaled their best finish in the competition, as they also claimed a fourth-place finish on their debut in 2005. Azerbaijan's Polina Rahimova was the top scorer of the tournament with 151 points, 21 more than any other player.