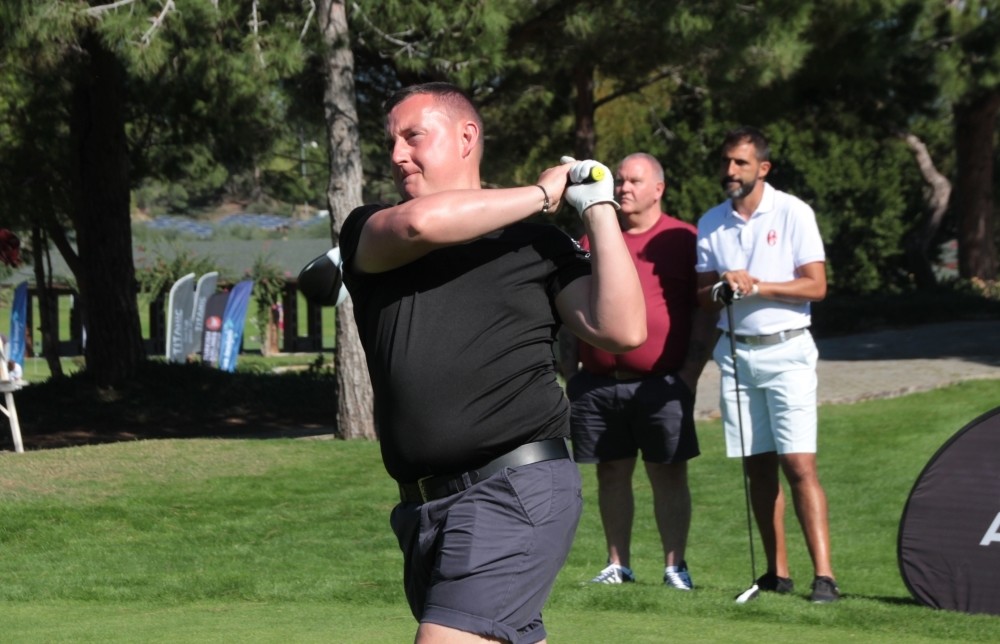 Britain's Luke Eunace clinched the championship.
by Compiled from Wire Services Nov 02, 2017 12:00 am

Britain's Luke Eunace clinched the championship with Warren Espey from South Africa finishing second and China's Zhen Ge placing third. Amid the 104 golfers from 62 countries who competed in the two-day event in order to be one of six contestants who will attend the 2017 Turkish Airlines Open in Belek between Nov. 2 and Nov. 5

The 2017 Turkish Airlines World Golf Cup ended Tuesday in the Mediterranean city of Antalya. Britain's Luke Eunace clinched the championship with Warren Espey from South Africa finishing second and China's Zhen Ge placing third. A total of 104 golfers from 62 countries competed in the two-day event in order to be one of six contestants who will attend the 2017 Turkish Airlines Open between Nov. 2 and Nov. 5 in Belek. The best gross award went to Malta's John Micallef. John Hunt won for the closest shot in the men's category and Mai Tokuda from Japan in the women's category.

Around 80 golfers, including Olympic medalists Justin Rose and Henrik Stenson, competed in the Turkish Airlines Open, which is the sixth of eight tournaments in the European tour's Rolex Series. Players who made the top 70 in the Race to Dubai on the European Tour were eligible to putt. Apart from Rose and Stenson, the tournament also hosted last year's champion Thorbjorn Olesen, three-time major winner Padraig Harrington, Ryder Cup icon Ian Poulter, Race to Dubai number one Tommy Fleetwood and English golfer Tyrell Hatton. A combined prize fund of $7 million was awarded at the event, which three Turkish players also competed in. Ali Altuntaş competed in the event for the fifth time, but the first time as a professional. Amateur golfers Leon Kerem Açıkalın and Taner Yamaç also competed under the Turkish Golf Federation's quota, according to Anatolian Agency (AA).

Meanwhile, masters champion Sergio Garcia deserves to be named European Tour 'Golfer of the Year' according to Justin Rose, one of the competitors in Antalya. Garcia is the standout favourite to win the award, which will be presented at the end of the European Tour season, for the first time on the back on his Masters play-off victory over Rose earlier this year at Augusta National. Rose is well placed to finish top of the Race to Dubai money list but even if he achieves that, he believes Garcia would still be more deserving of the European golfer accolade.

"We all aspire to end a season being awarded the 'Golfer of the Year' title but given Sergio has won three times on the European Tour this year and one of those was a Major Championship, then he must be favourite," said Rose.

"Sergio's season has been the highest of the highs given he won a first Major in his career and he would be my own choice for 'Golfer of the Year'."

Englishman Rose tees-up in this week's $7 million (6m euros) Turkish Airlines Open having captured a first Tour title in two years last Sunday in Shanghai. The effort took world No.6 Rose to third on the Race to Dubai standings but still just over two million points behind compatriot Tommy Fleetwood, with Garcia second some 800,000 points adrift of Fleetwood.