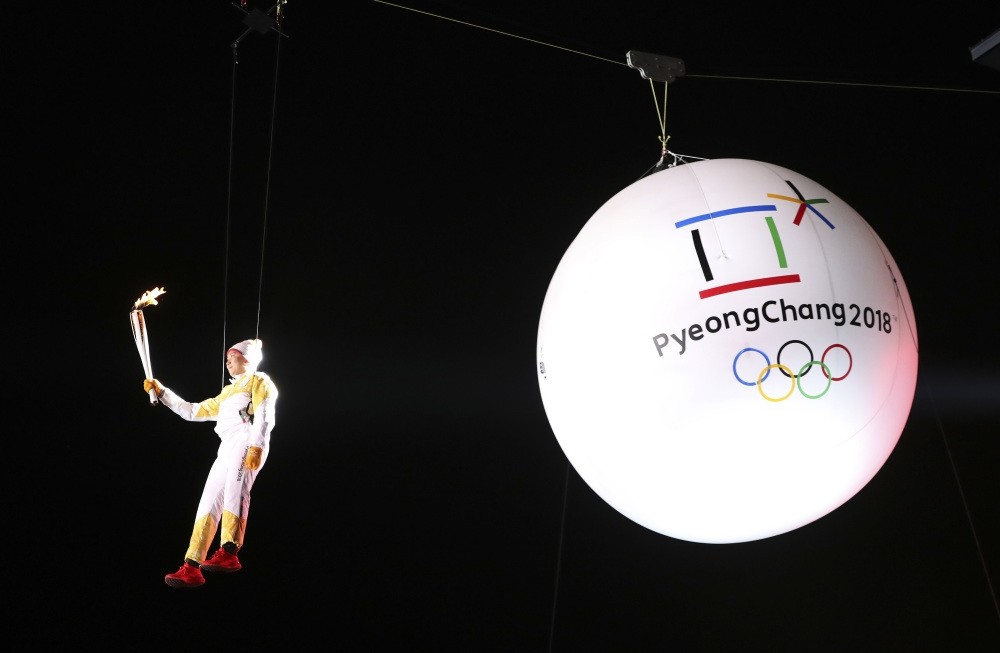 South Korean Ryu Seung-min, a member of the IOC Athletes Commission, carries the Olympic torch suspended from a wire during the Olympic Torch Relay in Incheon, South Korea.
by reuters
Nov 17, 2017 12:00 am

The World Anti-Doping Agency (WADA) said yesterday that Russia remains "non-compliant" with its Code, dealing a major blow to the country's hopes of being cleared to compete at February's Winter Olympics. Russia's anti-doping agency (RUSADA) has been suspended since a WADA report in 2015 found evidence of state-sponsored doping and accused it of systematically violating anti-doping regulations. WADA set out a roadmap for Russia to regain its status but at a meeting of its Foundation Board in Seoul yesterday decided that key criteria had not been met.

"WADA Foundation Board approves the recommendation by the Independent Compliance Review Committee that RUSADA remain non-compliant," it said on its Twitter feed. Kuwait, Equatorial Guinea and Mauritius had also been found non-compliant by the Board, it added. The decision is likely to add more pressure on the International Olympic Committee (IOC) to ban Russian athletes from the 2018 Winter Games. Russia escaped a blanket ban at the 2016 Summer Olympics in Rio de Janeiro but remains barred from competing in international athletics events. The IOC is set to decide on Russia's participation at its executive board meeting early next month.

"WADA's decision to maintain suspension on Russia anti-doping agency doesn't directly decide whether the country can participate in the games," said Nancy Park, a spokeswoman for the Pyeongchang organising committee (POCOG).

"It is a sensitive issue, and we are waiting for IOC's official decision for now." Countries and sports federations must be compliant with the WADA Code to be eligible for the Olympics, with the IOC making the ultimate decision on participation.

The IOC banned six cross-country skiers this month as part of an investigation into allegations of widespread doping and sample-tampering by laboratory and security officials at the 2014 Sochi Games. Russian Sports Minister Pavel Kolobkov hit out at the WADA decision, saying some of the criteria for RUSADA's reinstatement had a "political character," R-Sport news agency reported. A 2016 report by Canadian lawyer Richard McLaren found that more than 1,000 Russian competitors in more than 30 sports were involved in a conspiracy to conceal positive drug tests over a five-year period.