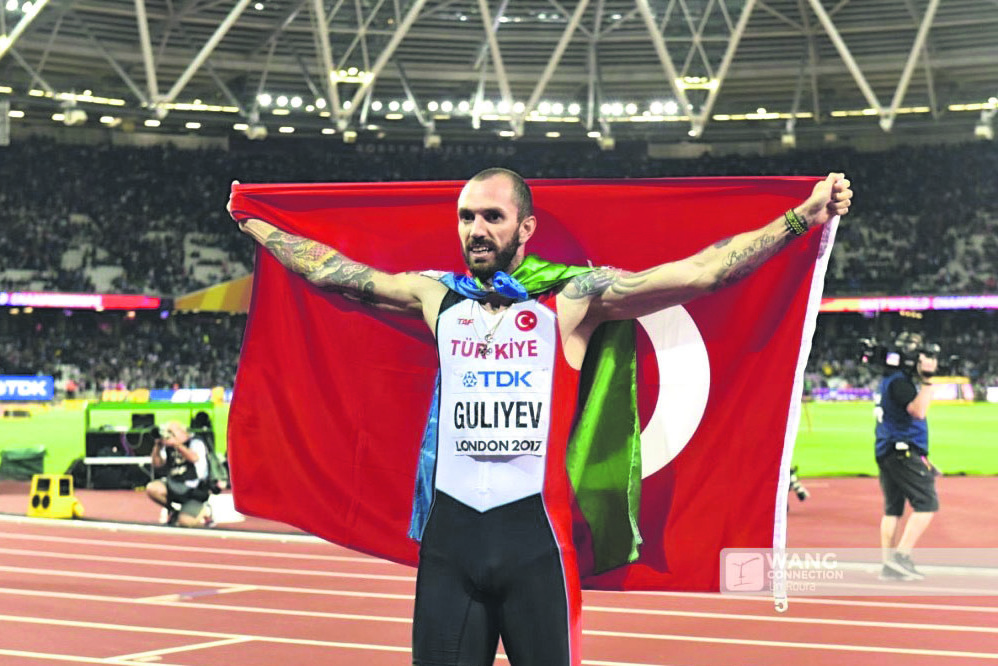 Turkish runner Ramil Guliyev who gave Turkey its first gold medal in the men's 200 meters, says his biggest goal now is to break the European record in next year's European Athletic Championships

Ramil Guliyev, a Turkish world champion sprinter, is seeking to break the 200-meter record in next year's European Athletic Championships.

"That is my biggest goal," the 27-year-old athlete told Anadolu Agency (AA) while he was training in the southern city of Antalya for the biennial event and the Mediterranean Games, which are held every four years. Guliyev, who is originally from Azerbaijan but gained Turkish citizenship in 2011, secured the country's first gold medal in the men's 200 meters at the IAAF World Championships in London in August.

A member of Turkey's Fenerbahçe sports club since 2010, Guliyev finished in 20.09 seconds, ahead of South African Olympic champion Wayde van Niekerk, who took silver in 20.11 seconds. Guliyev said that he became an athlete at age 14 in Azerbaijan and gained a number of achievements, but decided to move to another country due to inadequate opportunities for sports in the country.

"I saw that my potential was great. I had to work hard to turn that potential into reality," he said. "I needed a place to practice. It was very difficult at that time in Azerbaijan because there was no place to practice. They were not sending me to a camp abroad. It was a very difficult situation," he recalled. Guliyev was barred from participating in international competitions for three years after he transferred to Turkey seven years ago. The young athlete said that the IAAF World Championships in London had a very important place for him, where he got his gold medal after 10 years of hard work.

"My biggest goal now is to break the European record at 200 meters. After Europe, I want to break the world record and win medals in the Olympics. My training program is all set toward this end," Guliyev said.

Ramil Guliyev was third in 20.02 - faster than his London winning time in the Diamond League final in Brussels, on Sept. 1. Guliyev competes in the 100-meter and 200-meter events. He competed at the 2009 European Athletics Junior Championships, winning a silver medal in the 100-meter and a gold medal in the 200-meter. He holds the national and national junior records in both events. Guliyev is also the 200-meter European junior record holder and national junior record holder in the 60-meter. His 200-meter time is the second fastest by a junior athlete, after Usain Bolt's 19.93 sec. He came second in the men's European Athletics Rising Star of the Year Award for his achievements in 2009.