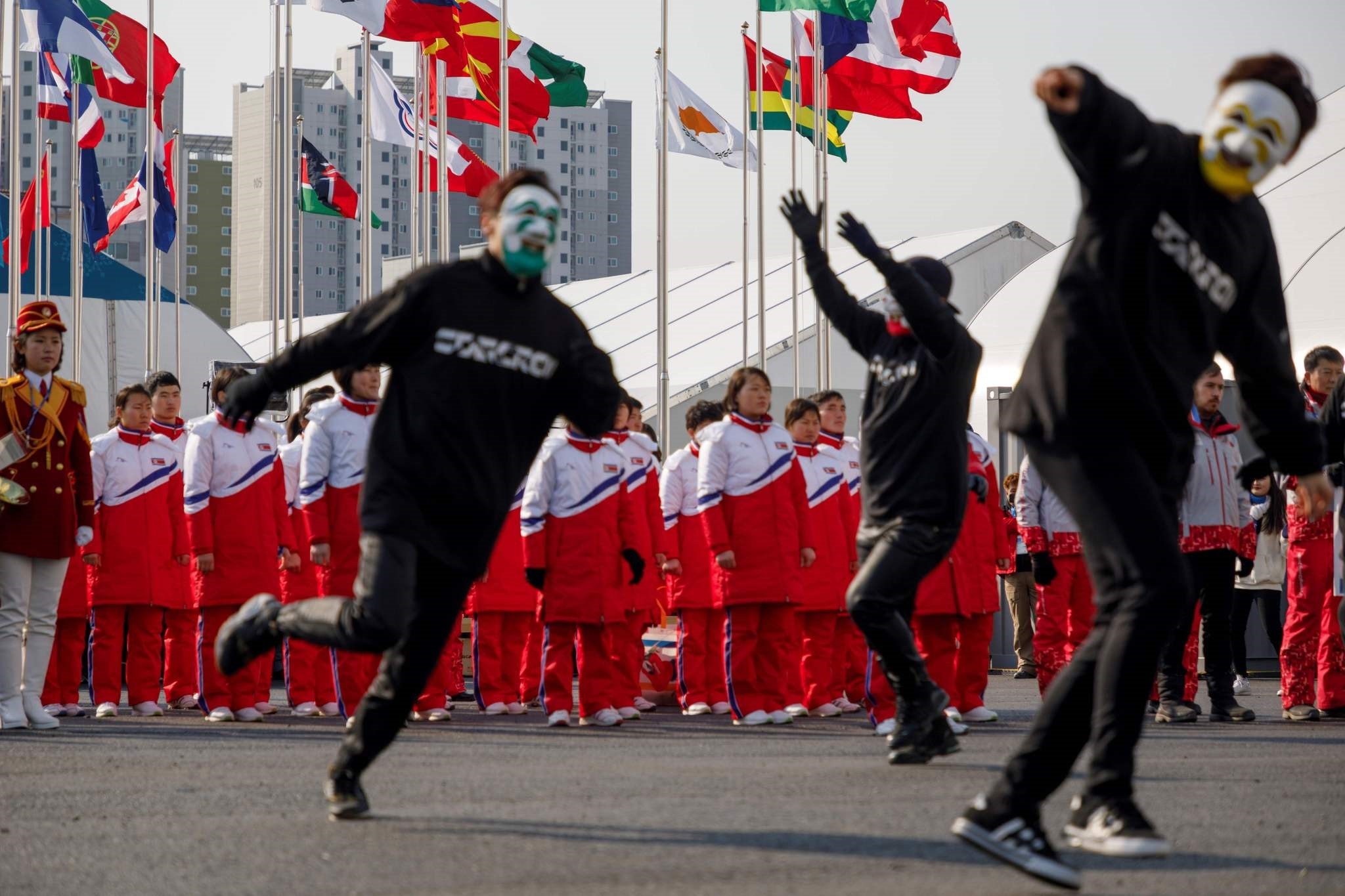 North Korea's athletes watch as South Korean B-Boys perform a dance routine at a welcoming ceremony at the athletes village ahead of the 2018 Pyeongchang winter Olympic games in Gangneung on February 8, 2018. (AFP PHOTO)
by Feb 08, 2018 12:00 am

Iranian and North Korean athletes at the Pyeongchang 2018 Olympic Winter Games will receive Samsung mobile phones, organizers said on Thursday, after Iran summoned South Korea's ambassador over reports its athletes would not get the gifts.

News reports said 4,000 of the latest $1,100 Samsung smartphones were being given to athletes attending the Winter Games, but athletes from Iran and North Korea would be excluded because of sanctions against the two countries.

Responding to the furor, the International Olympic Committee (IOC) said athletes from both countries would receive the phones but that the North Koreans would be asked not to take the devices home.

"The IOC will provide mobile phones to all athletes of all countries participating at the Olympic Winter Games Pyeongchang 2018. These phones contain essential logistical and competition information for the athletes," an IOC spokesperson said.

An Olympics organizer told Reuters last week that South Korea was unsure if North Korean athletes would be eligible to receive the phones because of U.N. Security Council sanctions.

The official declined to elaborate, but experts say the phone could violate a U.N. ban on the sale of luxury items and electronics with a potential "dual" commercial and military use.

Iran summoned South Korea's ambassador to Tehran to the Foreign Ministry, to explain the phone snub.

"If Samsung does not apologise for its unwise action, this will greatly affect Samsung's trade relations with the Islamic Republic of Iran", the state news agency IRNA quoted Foreign Ministry spokesman Bahram Qasemi as saying.

A spokesman for Seoul's foreign ministry spokesman did not respond to requests for comment.

Samsung said the IOC was responsible for distributing gifts at the Olympics and it had no further comment.

Iran has four competitors at the 2018 Winter Olympics. North Korea has 10 athletes entered to represent their nation, and 12 more in the combined North and South Korea women's ice-hockey team.

Tough international sanctions including travel restrictions and a ban on the sale of luxury goods and sports gear have complicated South Korean Olympic organisers' efforts to provide their northern neighbours with the same benefits available to other Olympians.

However, it was unclear why that would affect Iranian athletes, as Samsung products are widely available for sale in Iran, which has good diplomatic and trade relations with South Korea. Almost 18 million Iranians have Samsung phones, according to Iran's largest app market, Café Bazaar.

A source from within the Olympic movement told Reuters a delay in delivering the phones had been due to "a misunderstanding".