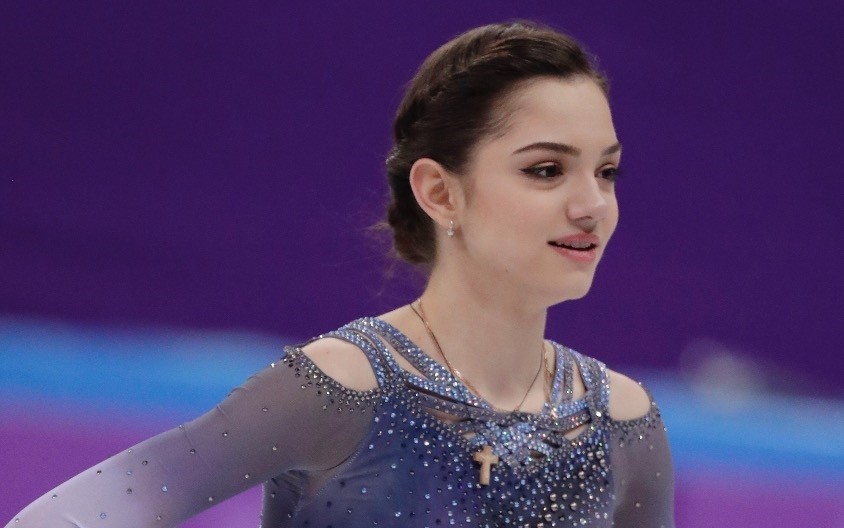 Evgenia Medvedeva may have conjured up a personal best score on her Olympic bow on Sunday but the Russian ice princess proved a harsher critic of herself than the judges.The two-time world champion boosted Russia's medal chances in the team event behind commanding leaders Canada but just as crucially gave her own prospects of claiming the women's singles crown a potent boost. With the defending champions struggling after Mikhail Kolyada flopped in his men's short program on Friday, Medvedeva put the team competing as neutrals under the Olympic Athletes from Russia flag, back in business. After Sunday's concluding pairs free dance Canada, silver medalists in Sochi four years ago, led on 45 points from Medvedeva's OAR on 39 with the United States in third on 36. The 18-year-old Muscovite was poised, polished and foot perfect in her short program to Chopin's Nocturne. With Russian flags waving in the stands the judges rewarded her routine which began with a triple flip - triple toeloop combination with a career best 81.06.

She said she was "happy" but quickly added, "I know what I can do better. On a scale of five, I'd give myself a four, maybe a bit less, a four minus a quarter."

Medvedeva arrived on the Korean peninsula three weeks after being deposed as European champion by her 15-year-old compatriot and training partner Alina Zagitova. With Zagitova lying in wait next week it was vital Medvedeva produced something special here, and she didn't disappoint as she proved she had fully recovered from the broken foot that sidelined her for two months late last year.

"Today was a personal experience for me and a lesson. That is valuable experience as the most important part, the individual competition is still to come," she added. "I have waited for these Olympic Games for 10 years. So many people were saying, it is nerve-wracking, it is a different competition."

"Yes, I felt a little bit nervous at the beginning of the program, but I just tried to stay calm and to be confident and I think it helped me," she added. Canada will be tough to deny after an assured display from Canadian ice dance stars Tessa Virtue and Scott Moir in their short program. They kept their team in control with their samba rhumba cha cha routine earning maximum points. The duo who won ice dance gold at Vancouver in 2010 were competing after acting as Canada's flagbearers at the Pyeongchang Games opening ceremony.

"We didn't know what to expect," said Moir about his third Olympics adventure. "That is the joy of the Olympic Games. I think what we felt is even more special. We have such a solid Canadian team. We are so proud to be a part of it." The team event reaches its conclusion today with the men's free skate in which Canada rely on dual Sochi silver medalist Patrick Chan, followed by the women and ice dance free skate.

- The Dutch speedskater Sven Kramer won the 5,000 meters for his third straight gold medal over the distance, becoming the first man to achieve that streak.

- The United States women's hockey team has rallied to beat Finland 3-1 to remain perfect when opening an Olympic tournament.

- Teen sensation Red Gerard of the U.S. nailed a tension-packed final jump on Sunday to win the slopestyle snowboarding and become the first Winter Olympic medallist born this century.

- Japanese women's forward Rui Ukita was suspended for one game by the International Ice Hockey Federation due to a kicking incident against Sweden.