Norway's Bjoergen becomes most decorated Winter Olympian of all time 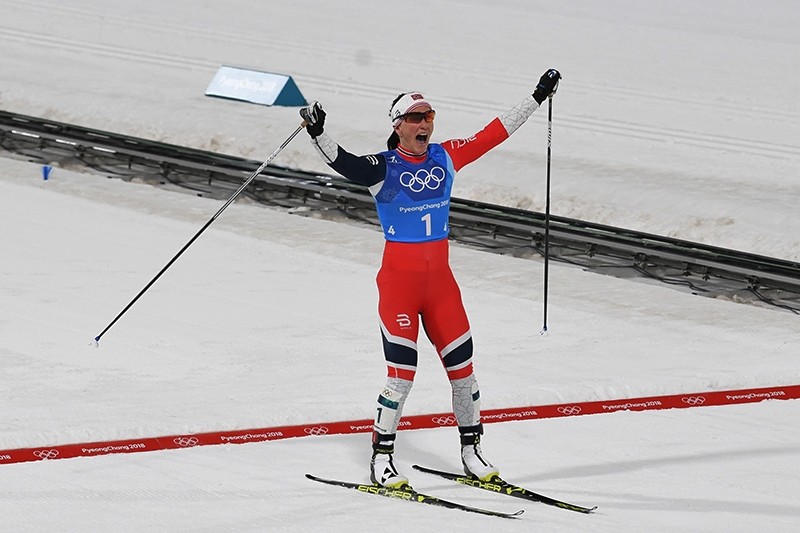 There were also gold medals for Norway, Germany, Canada, the United States and Japan, but away from the competition Russia was desperately hoping to persuade the International Olympic Committee to let the team march behind a Russian flag at Sunday's closing ceremony. A decision is due Saturday.

Bjoergen was looking to be the most successful Winter Olympian ever with gold in the women's team sprint but instead had to settle for bronze with Jessica Diggins and Kikkan Randall winning a first Games gold in the sport for the United States. The only other American to win a medal in cross-country skiing was Bill Koch, who took silver in the 30-kilometer race at the 1976 Innsbruck Games.

Bjoergen, 37, now has a record 14 Winter Olympic medals and can seal a joint-record eight golds if she wins the final event of her Games career in the 30-kilometre mass start on Sunday.

"It is hard to understand I have those 14 medals. I am very proud of what I have done over those many years," Bjoergen said.

She may not have won on Wednesday but Norway still top the medals table with 13 golds, 11 silvers and nine bronze after cross country skier Johannes Hoesflot Klaebo led the men's team sprint to glory and the nation's male speed skaters took gold in the team pursuit.

It was a bad day for speed-skating powerhouses the Netherlands, who had to make do with men's team pursuit bronze while the women lost out to gold medalists Japan.

Germany are second in the medals table on 12-7-5 after women's bobsleigh duo Mariama Jamanka and Lisa-Marie Buckwitz pulled off a surprise by hurtling to gold by just 0.07 seconds - though the victory took a little while to sink in.

"It was a moment of disbelief," 27-year-old Jamanka said. "We didn't understand right away what was going on. Then I screamed, they screamed, Lisa screamed. It was just unbelievable."

U.S. alpine skiing star Vonn is arguably the most famous name at these Games, but she missed out on gold in her favorite event and was left with bronze after Goggia produced a stunning run to seal downhill victory.

"I came here in Korea with one goal - to beat Lindsey," Goggia said. "This was good, but here I realized that, though this duel was really good, it wouldn't have helped me out so much because I have to be focused on myself."

On the ice, Finland claimed bronze in women's ice hockey and the Czech men beat the United States - bereft of NHL players after a row over participation - in the quarter-finals on a shoot-out.