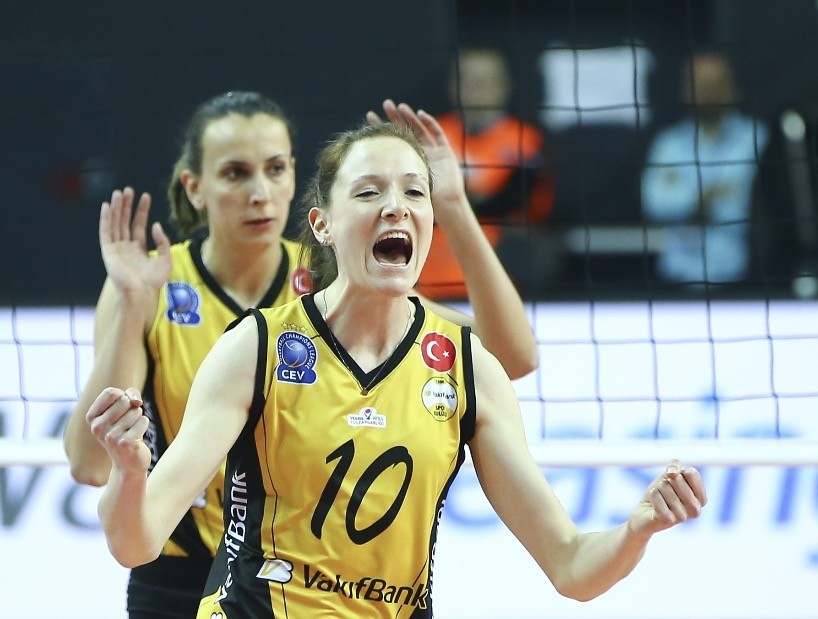 Vaku0131fBank players Milena Rasic (back) and Lonneke Sloetjes celebrate the win against the Swiss team Volero.
by Daily Sabah with AA Apr 07, 2018 12:00 am

VakıfBank and Galatasaray have made it to the Final Four of this year's CEV Women's Volleyball Champions League. Imoco Volley has also secured a spot in the tournament by taking two sets in its matchup against Dinamo Kazan.

The fourth team to take part in this huge volleyball show will be the organizer of the Finals, CSM Volei Alba from Romania. The teams will lock horns to decide the new champion in Bucharest in the first weekend of May. In the last two matches from the Playoffs Six Thursday, VakıfBank and Galatasaray showed that they deserve the spot in the final with great volleyball skills, according to CEV's website. VakıfBank did not have any big problems qualifying as it claimed two wins by 3-0 against its opponent Swiss team Volero.

Things were a bit more difficult for Galatasaray. It had to claim a 3-0 or 3-1 win in order to qualify directly or 3-2 to vie for a Golden Set. Despite losing the first set against Igor Gorgonzola, the players around head coach Ataman Güneyligil managed to motivate themselves and eventually booked their ticket to Bucharest.

VakıfBank's Hatice Gizem Örge said: "We are very happy. We started the game with a lot of motivation and I think we managed to keep being motivated throughout the whole match, which, of course, had a positive impact on our performance. This will be my fifth participation in the Final Four phase and I am incredibly excited about that.

Giovanni Guidetti, head coach of VakıfBank said: "I feel great and I would like to thank the club that gives me the opportunity to feel that kind of happiness again and again. We have amazing players and amazing staff. Taking part in six Final Four tournaments in a row means that I'm a lucky coach because I have been coaching a very strong team."

Meanwhile, Galatasaray qualified for the CEV Champions League Final Four tournament for the very first time in its history - but it hosted the event in 2013 when it finished the competition in fourth place. Galatasaray will meet Romania's CSM Volei Alba in the final four to be held on May 5 and May 6 in the Romanian capital, Bucharest. In the final four, Vakıfbank, who won Champions League titles in 2011, 2013 and 2017, will take on Italy's Imoco Volley.