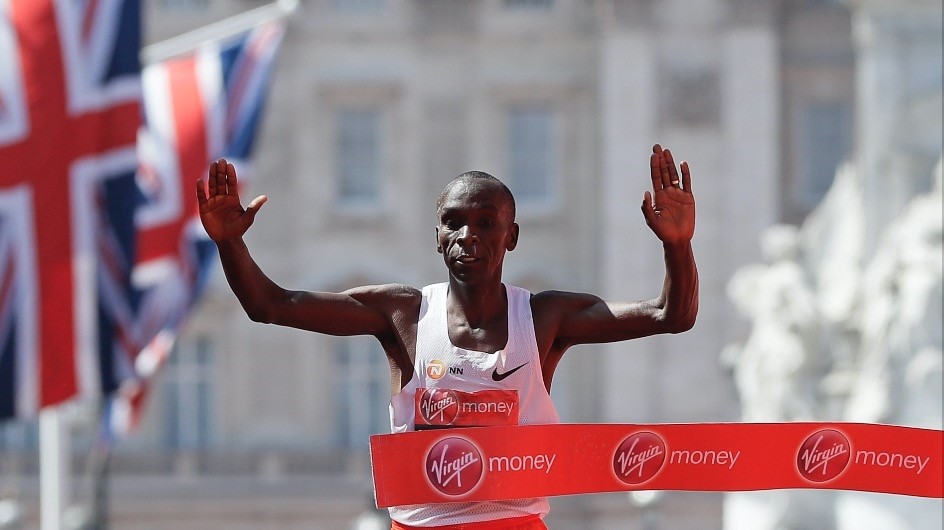 Kenyau2019s Eliud Kipchoge reacts after crossing the finish line to win the Menu2019s race in the London Marathon in central London.
by Associated Press Apr 23, 2018 12:00 am

Eliud Kipchoge swept to a third London Marathon victory and Vivian Cheruiyot won the event for the first time as Kenyans triumphed in sweltering conditions yesterday. The 33-year-old Kipchoge ran the 26.2-mile (42.2-kilometer) course in 2 hours, 4 minutes, 27 seconds to add to his wins in the British capital in 2015 and 2016. Shura Kitata Tola of Ethiopia was second, followed by Mo Farah in front of his home fans. While the race began in the southeast London district of Blackheath, the official starter for the men's race was more than 30 miles (48 kilometer) to the west of the British capital. Queen Elizabeth II pushed the start button in front of Windsor Castle. The race ended in front of the monarch's London residence - Buckingham Palace.

Cheruiyot, the Olympic 5,000-meter champion, crossed the line in 2:18:31 seconds to win at her second attempt. Fellow Kenyan, Brigid Kosgei, was 1 minute, 42 seconds further back and Tadelech Bekele of Ethiopia was third. There was a home success with David Weir winning the men's wheelchair race for an eighth time after a sprint finish. The 38-year-old Weir clocked 1:31:15 to beat Marcel Hug of Switzerland into second place, while Daniel Romanchuk of the United States was third.