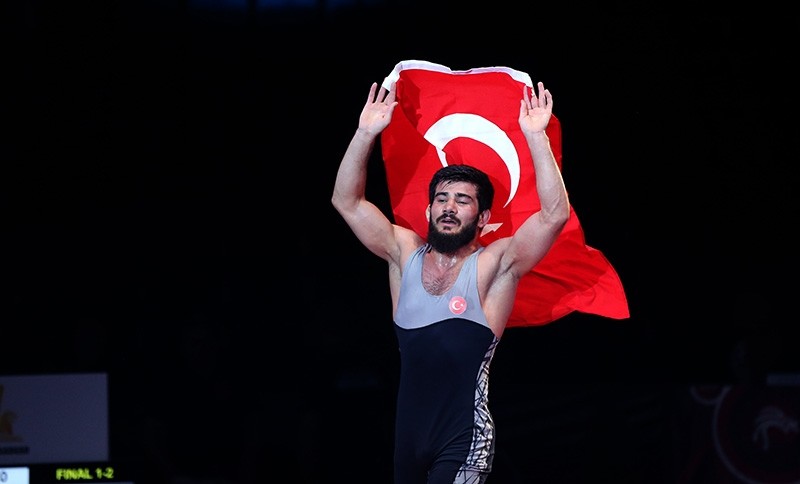 Turkey, as a team, won five gold, eight bronze, 13 medals in total in the European Wrestling Championship, held Russia's Republic of Dagestan in northern Caucasus. Turkey achieved its greatest success in European championships in terms of number of medals.

Soner Demirtaş won the gold medal in the European Wrestling Championship after beating his French counterpart Zelimkhan Khadjiev in the city of Kaspiysk on Sunday. Demirtaş became a gold medalist for the third time in a row when he beat Khadjiev 2-0 in the men's freestyle 70-kilogram category. The victory was Demirtaş's third consecutive European title. He was a bronze medalist at the 2016 Rio Olympics.

Speaking to Anadolu Agency (AA), Demirtaş said he wanted to dedicate this medal to his family. "Because my father had a dream when I started wrestling. He wanted to see [me as] a champion. Four of his children were wrestlers. It was given to me to bring the dream to life," said Demirtaş.

Later, another Turkish athlete Taha Akgül also won a gold medal in the same tournament. Akgül clinched the victory beating his Georgian competitor Geno Petriashvili in the men's freestyle 125-kilogram category in the final match of the tournament. He led 1-0 in the first set in his match at the Ali Aliyev Sport Complex and won the competition 2-1. Akgül is the Rio 2016 Olympic gold medalist in the same category.

With Sunday's victory, the national wrestler of Turkey repeated his record in the European championship for the sixth time. Akgül told AA the victory was revenge against his Georgian rival to whom he had lost the World Cup last year.

"I had lost the World Championship to the same athlete in a dramatic way. I had to win in the return match. I had promised my country, the nation, our coaches and especially our President [Recep Tayyip Erdoğan]. He was also very upset," he said.

The national athlete said he was dedicating the gold medal to the family of the troops martyred in Operation Olive Branch in Syria's Afrin region and the veterans.

Turkish team's coach Abdullah Çakmar congratulated Akgül for his gold medal and said, "We got the gold medal that we had left in France," referring to last year's world cup tournament.

"We dedicate our medals as a present to you and the president," he added.