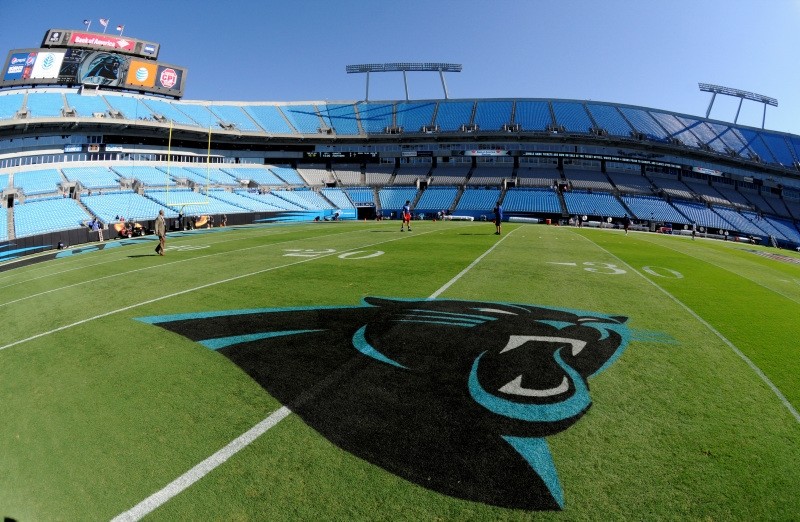 In this Sept. 22, 2013, file photo, a Carolina Panthers logo is displayed on the field at Bank of America Stadium prior to an NFL football game between the Carolina Panthers and the New York Giants in Charlotte, N.C. (AP Photo)
by May 17, 2018 12:00 am

David Tepper and the Carolina Panthers announced an agreement in principle is in place to transition ownership from franchise founder Jerry Richardson pending NFL approval.

Tepper will reportedly pay $2.275 billion for the Panthers, an expansion franchise in 1995. Other bidders conceded Tuesday to Tepper's final bid, which is well above the NFL-record $1.4 billion sale of the Buffalo Bills in 2014.

"I am thrilled to have been selected to be the next owner of the Carolina Panthers," Tepper said in a joint statement distributed by the Panthers on Wednesday morning. "I have learned a great deal about the community and the team over the past several months and look forward to becoming part of the Carolinas. I want to thank Jerry Richardson and the Panthers' partners for all they have done to establish and develop the NFL in the Carolinas. It has been a remarkable 25-year journey and I promise to build upon the Panthers' success on the field and in the community."

The agreement comes five months after Richardson announced he would place the franchise on the market amidst allegations of sexual harassment and racial intolerance in the workplace. A final $2.275 billion price tag exceeds the pro sports franchise record amount paid by Tilman Fertitta to purchase the NBA's Houston Rockets ($2.2 billion).

--Former Dallas Cowboys receiver Dez Bryant says he does not regret rejecting a multi-year contract offer from the Baltimore Ravens earlier this offseason as he seeks a one-year deal to prove himself.

"Nope not 1 bit and very appreciative for the offer. .. what's crazy is how reports like this will try to tarnish someone character.. the slight jab saying it's not easy to get along with. I thought the media would give up by now with betraying me as something that I'm not," he tweeted in response to a question about the Ravens' offer.

The Ravens went on to sign New Orleans Saints restricted free agent wideout Willie Snead to a two-year offer sheet, which the Saints chose not to match. While Bryant, 29, remains in limbo, he also made it clear he does not have any plans to retire.

--NFL owners will vote at next week's league meetings on a proposal to make all ejections subject to video review, the league announced in a written rules proposal.

The proposed rule change, which will apply to "any disqualification of a player," is another step in the league's emphasis on player safety this offseason, after a rule was approved in March to penalize, and for flagrant offenses eject, players who lower their helmets to make contact with an opponent. Paired together, the two rules would function similarly to the NCAA's targeting rule.

Many coaches and members of the league's competition committee have pushed to make ejections reviewable as a backstop for the enforcement of the "lowering the helmet" rule, which was initially met with skepticism from some. If approved, the new rule would require the league's officiating center in New York to review video of any offense after an ejection is called and confirm or overturn the decision.

--The felony resisting arrest with violence charge against New York Jets wide receiver Robby Anderson from a 2017 incident in Miami is expected to be dropped, according to multiple reports.

"This is the state, having reviewed it, doing what they're supposed to do when you feel there's not a likelihood of any conviction," Anderson's attorney, Ed O'Donnell, told ESPN. "They dropped the case."

Anderson was arrested at a music festival in Miami Beach on May 7, 2017, after allegedly "fighting with security" and pushing a police officer. A trial hearing had been scheduled for Aug. 6, but prosecutors have determined there is insufficient evidence, O'Donnell told ESPN. Anderson, who turned 25 last Wednesday, still faces a misdemeanor charge of reckless driving stemming from a separate incident -- a Jan. 19 arrest in Sunrise, Fla. -- with a hearing set for July 19.

--Former Washington Redskins cornerback Bashaud Breeland has visited the Indianapolis Colts and will visit the Arizona Cardinals on Thursday, according to multiple reports.

Breeland agreed to join the Carolina Panthers on a three-year, $24 million deal with $11 million guaranteed during free agency's legal tampering period in March, but the agreement was nullified a few days later when he failed his physical due to a foot injury.

Multiple reports said Breeland required a skin graft for the injury, which he suffered on vacation, but ESPN reports that his foot has healed and he is expected to pass all medical tests.

--Suspended Dallas Cowboys defensive end Randy Gregory will file for reinstatement from the NFL on Thursday, according to multiple reports.

Gregory was banned by the league on Jan. 6, 2017, for a minimum of one year due to multiple violations of the NFL's substance-abuse policy. A 2015 second-round draft pick out of Nebraska, Gregory last played for Dallas in the 2016 season finale.

The reinstatement process, involving interviews and examination of medical and police records, could take 45-plus days before it ultimately ends up in front of commissioner Roger Goodell. A decision is expected within a maximum of 60 days, which would be right before training camp begins in late July.

--The Buffalo Bills will honor one of the franchise's greats when they retire Thurman Thomas' No. 34 this season, the team announced.

"34. Forever Thurman Thomas. We will retire our Hall of Fame running back's number at our home Monday Night Football game this season!,' the team's tweet declared. The ceremony will come when the Bills host the New England Patriots on Oct. 29.

Thomas, who played 12 seasons of his Hall of Fame career in Buffalo, reacted on Twitter by saying "Thank you @buffalobills I'm overwhelmed."

--First-round running back Rashaad Penny signed his rookie contract with the Seattle Seahawks, the team announced.

Terms of the deal were not announced, but based on Penny's No. 27 draft slot, it will be a four-year contract worth about $10.7 million, fully guaranteed, with a $5.9 million signing bonus. Like all first-round picks, Penny's contract will come with a fifth-year team option.

Financial terms of the deal were not disclosed, but the deal will be for four years and around $4.3 million, based on his No. 56 overall draft slot.

Dawson, a defensive back, is the seventh of the Patriots' nine draft picks to sign. Only first-rounders Isaiah Wynn and Sony Michel remain without deals.

--Veteran coach Dennis Erickson is back out of retirement and was introduced as coach of the Salt Lake City franchise of the Alliance of American Football.

The special teams ace had signed a one-year deal in April after hitting free agency.

Mauti, 28, had 11 defensive tackles while playing in 11 games (two starts) last season. Overall, he had 57 tackles in 35 contests (four starts) over three seasons with New Orleans.

--The Tennessee Titans have reached a deal with wide receiver Nick Williams, the team announced.

Williams entered the league with the Washington Redskins in 2013 and spent the last three seasons with the Atlanta Falcons.

The 27-year-old wideout has 28 catches for 283 yards and a pair of touchdowns in 22 career NFL games.