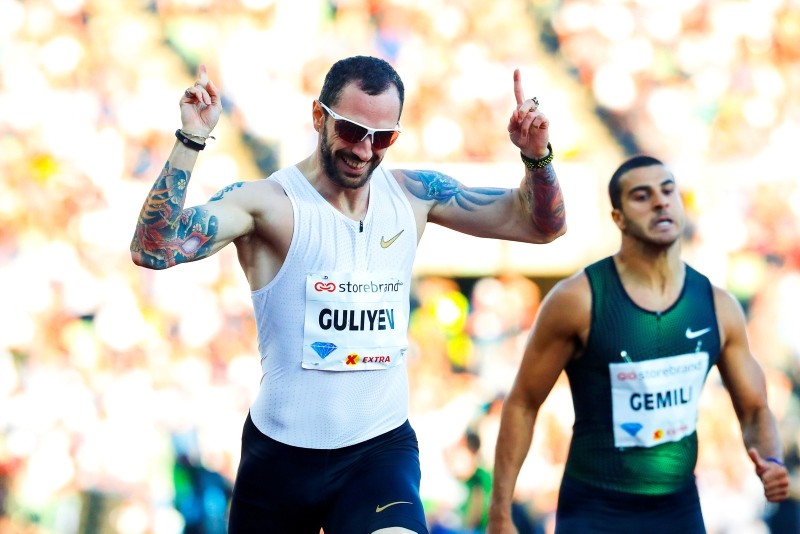 World champion Ramil Guliyev made it two wins in three days over 200 meters - in wildly contrasting conditions - when he delivered his trademark strong finish to triumph in the Oslo Diamond League's Bislett Games on Thursday.

On Tuesday the Turk overcame freezing conditions and strong winds to win in Turku, Finland in 20.23 seconds but on a lovely sunny evening in Norway he powered home in 19.90.

Canada's Aaron Brown dipped under 20 seconds for the first time in his career in taking second in 19.98.

"Great stadium, great public, nice weather - in such conditions you can only run well," said Guliyev.

"I'd been hoping to go faster but I've had a few setbacks. I'll definitely run the 200 at the European championships and my goal is to break Pietro Mennea's European record (19.72 set in 1979)."

Murielle Ahoure of the Ivory Coast showed the starting prowess that helped her to the world indoor title this year to take the women's 100 meters in 10.91, holding off fast-finishing Dina Asher-Smith whose 10.92 smashed her own United Kingdom record of 10.99, set three years ago.

There was a chaotic women's 3000m steeplechase where one of the barriers was set at the men's height. Officials scrambled to adjust it mid-race, at one point the field hurdling it after it had been lowered at one end but left too high at the other, with several athletes falling over the sloping bar.

American world champion Emma Coburn, who had been gesturing, trying to bring officials' attention to the remarkable blunder, led for most of the race before being overhauled by Kenya's 2015 world champion Hyvin Kiyeng.

"I'm incredibly frustrated that we had to hurdle the men's barrier on the back straight three times," said Coburn.

"We were waving around but it wasn't solved until my husband went on to the track to tell the officials.

"It panicked me but I tried to stay calm. After the stress the race slowed down but today was a step in the right direction after I fell in Rome."

Briton Chris O'Hare continued his good run of form with a tactically impressive victory in the 1,500 meters in 3:35.96 though the crowd were on their feet for 17-year-old local hero Kakob Ingebrigsten who ran a superb 3:36.06 for third place.

A year ago Ingebrigsten became the youngest athlete to run a sub-four minute mile.

After falling attendances in recent years there was a near-full house on Thursday, but their hope of seeing Norwegian Karsten Warholm triumph in the 400m hurdles disappeared as the world champion faded on the home straight to be well beaten by Qatar's Abderrahman Samba, whose 47.60 broke the 32-year-old meeting record of 47.82 by American Danny Harris

South Africa's Caster Semenya barely broke sweat in winning the 800 meters in 1:57.25, eight meters clear of the chasing pack while Mutaz Essa Barshim was untroubled in winning the high jump with a 2.36 clearance to make it three out of three in the Diamond League this season.

The night ended with the traditional Dream Mile which, after a pedestrian start, came down to a last-lap burn-up which played into the hands of Kenya's world champion Elijah Motonei Manangoi who won in 3:56.95.

The Diamond League now moves on to Stockholm on Sunday.