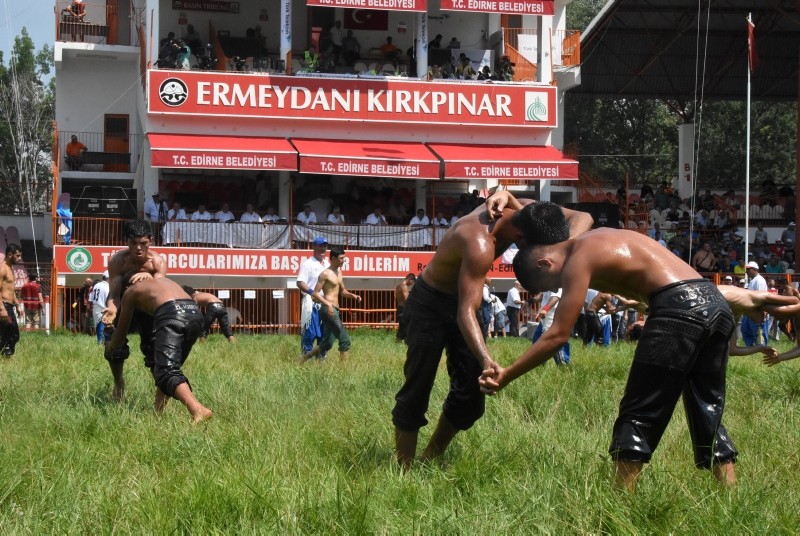 The Kırkpınar oil wrestling festival, a major national event that has been held since the mid-14th century, was held for the 657th time in northwestern Turkey's Edirne province on Friday.

The younger wrestlers will compete first in the competition, which will take place during the weekend. The main event, however, will be for the title of "başpehlivan" – which translates to "head wrestler" in English – in Sunday's final match.

Half-naked, bulky wrestlers in leather pants will try to put each other's backs on the ground while completely covered in oil during the Kırkpınar festival, which is one of the oldest continuous wrestling events in the world and a popular tourist attraction.

Aside from the title, champions of the Kırkpınar competition are also awarded a golden belt. If the wrestler manages to win the competition three years in a row he gets to keep the golden belt, however, throughout the festival's history only five wrestlers have achieved this feat.

In addition to holding the Guinness World Record for being the longest running sports event in history, the Kırkpınar oil wrestling festival was also added to UNESCO's Intangible Cultural Heritage List in 2010.

Kırkpınar traces its history to the 14th century. Legend has it 40 soldiers deployed for the conquest of the modern-day Trakya region, where Edirne is located, often engaged in oil wrestling for training and a pastime activity. Two brothers among the soldiers were so fixated on defeating each other, they wrestled for hours and died on the spot, according to the legend. Their burial site is where the present-day contest is held.

During the reign of Ottoman Sultan Murat I a wrestling school was established in Edirne and since then, an annual wrestling event has been held in the city. It was scrapped during the last days of the Ottoman Empire but was introduced again as a regular event in the early years of the Republic of Turkey.