Members of combined Koreas team celebrate their victory during the ceremony for women's 500-meter dragon boat at the 18th Asian Games in Palembang, Indonesia, Sunday, Aug. 26, 2018. (Kim Do-hun/Yonhap via AP)
by Associated Press Aug 26, 2018 12:00 am

There was no dividing them. The folk song Arirang played and the "unification" flag was raised to celebrate the first gold medal by a combined Koreas team at a major multi-sport event.

The crew comprising South Koreans and North Koreans won the 500-meter dragon boat final on Sunday at the Asian Games co-host city of Palembang, a day after the paddlers delivered the historic first medal for a combined Koreas team by taking bronze in the women's 200-meter dragon boat competition.

The gold was awarded to Korea — the name given to the combined teams that are entered in rowing, canoeing and women's basketball at the Asian Games — rather than being added to the tally of either North or South Korea.

The celebrations started as soon as the dragon-headed boat with its 10 paddlers, its drummer and its sweep crossed the line.

Koreans hugged on the boat and on the banks along the course.

South Korean news agency Yonhap quoted Kim Kwang Chol, a North Korean coach of the traditional canoe team, as saying he "felt the strength of a unified nation when we came together, dedicated our minds to a single purpose, and paddled the boat forward." 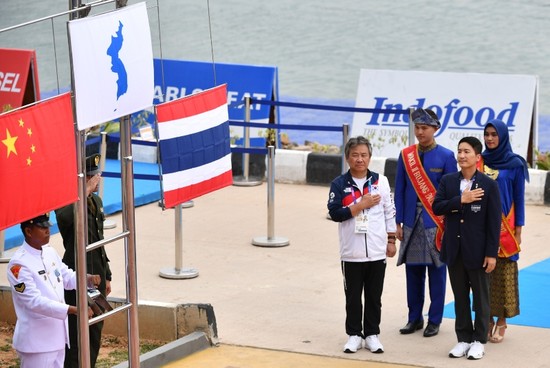 The Koreas, still technically at war after their 1950-53 conflict ended in an armistice, have fielded 60 athletes in combined teams in the three sports along with larger contingents for their respective national squads.

Athletes from both countries paraded into the opening ceremony together last weekend behind the "unification" flag, which features the outline of the peninsula in blue on a white background. It took a week to reap the medals, a big achievement considering the joint canoe crews only had three weeks to prepare for the games.

Kim, the North Korean coach, said he wasn't sure when he took his paddlers to South Korea for practice that they'd have enough time to prepare.

"But I noticed that the North and South Korean athletes' fighting spirit was so high after watching them train in hot weather," Kim was quoted as saying by Yonhap. "As I saw our boat going forward with the athletes' combined effort and strength, I felt the united power of Korea."

In the 500, the Koreans finished the six-team final in 2 minutes, 24.788 seconds to hold off China and Thailand.

There could be more gold for the Koreas, too, with the combined women's basketball team reaching the semifinals with a 106-63 win over Thailand.

South and North Korea have entered joint teams in previous international events, starting with the 1991 table tennis world championships, and more recently at the Winter Olympics in Pyeongchang, South Korea.

The women's ice hockey team at the Olympics gained huge support despite losing all of its games, and inspired more cooperation.

The women's basketball team, featuring nine South Koreans and three from the North, will play Taiwan in the semifinals, with the winner advancing to the gold-medal game. Taiwan beat the Koreas by two points in the group stage last week.

Track and field competition entered a second day with world champion Rose Chelimo winning the women's marathon for Bahrain in a hot and humid race.

The Kenya-born Chelimo had a big lead by the 30-kilometer mark and won in 2 hours, 34 minutes and 51 seconds.

Chelimo represented Kenya internationally before switching to represent Bahrain ahead of the 2016 Olympics in Rio de Janeiro. She won the world championships title in London last year.

The final of the men's 100 meters is among the finals in track on Sunday night.

While China is dominating the medals standings at the games, there won't be any gold, silver or bronze added in men's singles in badminton, a sport the nation loves.

Chen Long lost to Indonesia's Anthony Sinisuka Ginting 21-19, 21-11 in the quarterfinals, meaning China is set to miss a medal in the men's singles for the first time since 2002, and only the second time since 1970.

Jonatan Christie, another local hope, upset top-seeded Shi Yuqi in the second round.